Beer Tasting at The Dubliner 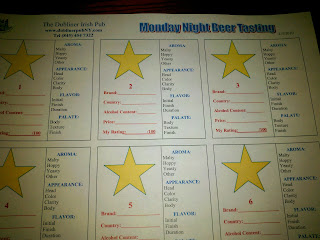 Every wine drinker likes a good beer at times.  I am one of those.  In fact a few years back I went to Vermont and did a beer tasting tour around the state and stopped at wonderful micro breweries.  When Chrystal aka ‘The Babysitter’ called to invite me to a beer tasting at the Dubliner one Monday evening, I said sure.

Evidently The Dubliner has tastings on Monday evenings.  The first Monday is Beer, second Monday is Wine and then they do spirits the third Monday and cocktails the 4th Monday.  How come I didn’t know about his?  I do now.
All the tastings come with ‘petite’ Entrees.  For the $20 fee, you do get value for your money.  The petite entree  consisted of a pork medallion, stuffing, mashed potato and green beans.  That’s plenty for me, had I known I wouldn’t have eaten dinner with my family before heading out.

We got our tasting sheets to evaluate the beers.  It’s like a wine tasting.  We evaluated the beer based on head, color, clarity, body and taste.  Brendan would tell us a little about the beer and we would have to guess the name of the brewery.  I am happy to say, I guessed the Captain Lawrence selection, local beer from Pleasantville, NY 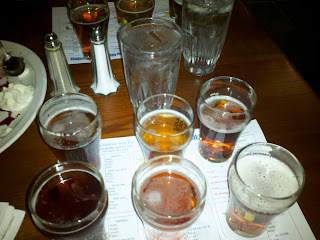 Out of all 6 beers tasted the two I liked best were Flying Dog Brewery ‘Raging Bitch Belgian’ IPA (that probably describes me at times) and Dog Fish Brewery 90 Minute IPA.  The Raging Bitch was light in color had the nose of wisteria and had a hint of coriander on the palate.  The 90 Minute IPA was a bit more hoppy which explains the bitter finish.

An honorable mentions goes to SOS (Save our Shore) beer which is a beer produced by a joint venture between Abita Beer and the Louisiana Seafood Promotion & Marketing Board and all proceeds raised by the sale of this beer go to assist with the rescue and restoration of the environment, industry and individuals fighting to survive the disastrous oil spill.  This beer had flavors of orange and clove and was very refreshing. 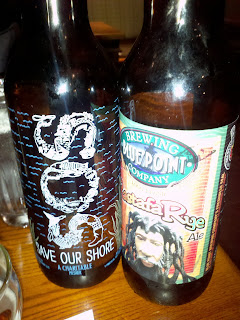 The other beers we tasted I like as well but the above three stood out the most. The only beer, which surprise me that I liked the least was Long Trail’s Hibernator. I’ve been to Long Trail when on a ski trip to Killington and even brought home the Hibernator for my non skier husband.  That was a surprise to me.  The other two tasted was a Captain Lawrence Pale Ale; Blue Point Brewery RastafaRye Ale which is a rye beer.  Blue Point is another brewery giving back as the company donates a portion of all RastafaRye Ale to ‘They Often Cry Outreach (TOCO) a Taj Weekes charity foundation that helps orphaned and underprivilege children in the Caribbean and around the world.