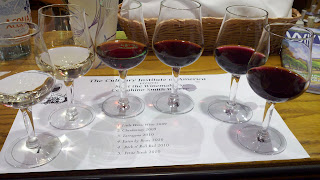 Last Thursday was the 2012 kick off dinner of the Culinary Institute of America’s Winter Dining Series and the wines featured were from Cereghino Smith Winery in the Hudson Valley.  I will go into the wines in more detail in another post.

We began the tasting in the Danny Kaye Theatre with 6 of their wines, 2 whites and 4 reds.  After the seminar we strolled across the courtyard to the American Bounty Restaurant where 5 of their wines were paired with 4 courses.

The first course was Dry-aged Beef Carpaccio, Watercress, Anchovy Pine Nut Dressing paired with 2010 Eaten by Bears which is a Meritage blend of California and New York Grapes.  The wine went very well with the beef.

There were two wines paired with the next course.  2009 NY Chardonnay from Keuka Lake and 2010 Tarragona which is a Mourvedre from Lodi California.  The Chardonnay went beautifully with this course.  The Duck brings out the oakiness in the wine and mellows it out.  It was smooth flowing and the pairing mellowed out the strong butterscotch finish that was present prior to the Ducks influence.  The Tarragona was not that favorable.  The pairing neutralized  the wine.  Brings out some hints of woody cherry.

For dessert we had Warm Gingerbread Caramelized Apples, Creme Fraiche paired with 2009 Bianca from California. This was a great pairing.  The Bianca was a semi-dry and acidic with hints of soft bubbles.  The sweetness of the dessert combats the acidity of the wine very well.  The fruitiness in the wine adds to the gingerbread.

The dinner was lovely and I paid for it the next day with a nice food hangover.  Not use to eating so much.