Concert and Wine at Wente Vineyards

Two weeks ago I was out in California for a friends “End of Summer” party. Any excuse to go to the left coast! We won’t get into my flight experience to get out there but let’s just say, I got out and returned safely and that is all that matters!

Thursday night we had planned to go see REO Speedwagon at Wente Vineyards in Livermore, CA.  I was really excited, not for the concert part, (Sorry Uncle Wally, Kevin and crew) but to go to Wente Vineyards. Ever since I participated in a twitter tasting with their Morning Fog Chardonnay, I’ve wanted to see and taste what else they produce and visit the area. 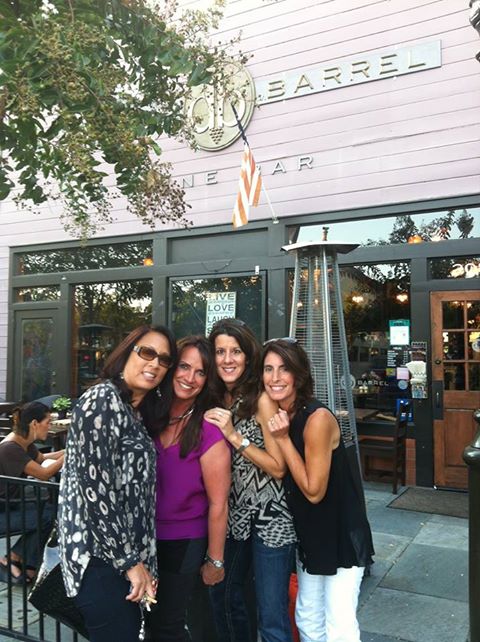 This was my first time in the Livermore area of California.  We began the evening at the Double Barrel Wine Bar where we had tapas and wine. Handley Pinot Noir to be exact.  This was perfect plates before a concert.

I found the Livermore area very flat and in a valley.  Was told it gets extremely hot there.  Not the case that evening. I had to put on my jacket during the concert.

What a beautiful venue for a concert!  Wente definitely has this down to a science.  Parking was easy and golf carts rides to the gate were great.  (However, after the concert you were on your own..foot power) They have a great restaurant and a golf course.  Go play 9, have dinner and watch a concert.  Does it get any better than that? (I left my golf clubs in NY, so no golf for me) The food at the restaurant looked amazing.  There were many people sitting outside eating and the outdoor buffet had just closed when we arrived.  Wine was being served throughout and there was even a Ghiradelli chocolate tasting.  (The Cabernet Chocolate was amazing!) 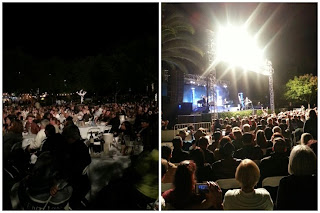 Our seats were okay for the concert but what really took me was the way it was set up.  There was your traditional row seating and then behind it there were round top tables of 10 scattered throughout.  What a great idea to get friends together, go for dinner, drink wine and watch a concert. 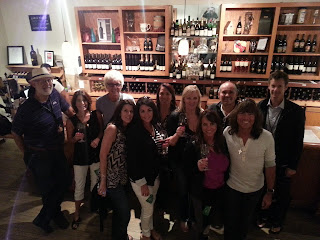 The concert was great and afterwards we went to the tasting room with some of the band members and did a tasting.

A little background on Wente before I go into the wine.  Wente is the country’s oldest, continuously operated family-owned winery  Today fifth generation winemaker Karl D. Wente is at the helm of nearly 3,000 acres of Estate Vineyards. 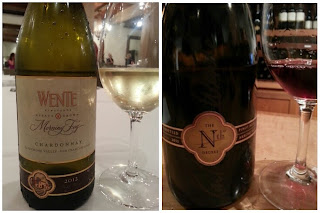 The three wines that stood out for me at the tasting was of course the Morning Fog Chardonnay, but then I was introduced to the Nth Degree.  The Nth Degree wines are handcrafted, limited production wines. The focus of these small lot wines is to create wine that reflects the distinctive terroir of their estate vineyards.  To be bottled as a “Nth Degree” wine the wine must show style and finesse of the top degree.  These vintages are the best of the best.  Of course I liked them the best!

The 2011 Pinot Noir and 2011 Syrah were wonderful! Since I previously wrote about the Morning Fog I’ll give you highlights of the Nth Degree.

2011 The Nth Degree Pinot Noir  – Wow this was nice and elegant.  It had a lot of complex flavors from plum and black cherry to some earth and wood.  On the way to the finish it showed some nice spice

2011 The Nth Degree Syrah – This Syrah was nice too, more body than the Pinot Noir.  Dark berry flavors with hints of chocolate and mocha combined with some toasty oak.  Some black spice on the finish. The wine had very nice structure.

Price…well the Morning Fog retails for $15 while the Nth Degree wines are much more expensive.  You’ll have to dig deep and have these for a special occasion.  They retail for $80 and $70 respectively.

If you are out in the Livermore Valley area of California, you have to stop at Wente.  Play golf, drink some wine and stay for a concert.