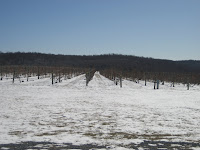 What do you do before the Superbowl – attend the Chili cook-off at Millbrook Winery with the babysitter.  The contestants were Stacey and Barbara, each preparing a unique chili prepared with a different Millbrook wine. The babysitter – Chrystal, who babysat my kids when my daughter was 8 months old until she was 8.  (My daughter is now 15.) The tasting began at the tasting bar, me and Chrystal along with a couple from Connecticut and Red Hook.  We began with the 2008 New York State Chardonnay.  This Chardonnay is a blend from the three major growing regions in New York.  On the nose there was bouquet of key lime.  There was oaky flavors with a soft hint of vanilla on the finish. 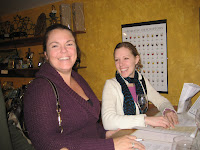 Then we moved onto one of my favorite Chardonnays the 2008 Proprietor’s Special Reserve.  This Chardonnay is from Millbrook and Oak Summit Vineyards.  This Chard was barrel fermented and underwent malolactic fermentation.  On the nose was a bouquet of pear and hint of lemon.  Some nice flavors of soft mango. It had the nice creamy buttery silky finish that I like and so did the babysitter.
Onto the reds – the 2007 NYS Pinot Noir.  This pinot was sourced from the north shore of Long Island.  It’s a medium bodied wine and I got a lot of earth and oak on the nose with a little cherry. The cherry carried over to the flavor of the wine along with hint of strawberry. 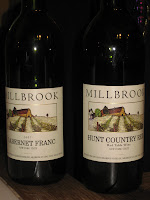 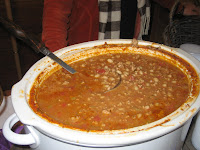 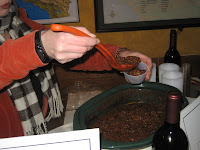 Now onto the Chili contest.  Two chili’s were prepared.  Stacey prepared a venison chili made with Cabernet Franc.  This was her first time making the dish and it was quite good.  The cab franc went nicely with it. Barbara tried her hand at a turkey and white bean chili and  was prepared with their 2008 Unoaked Chardonnay.  This chili was good too.  It was quite difficult to vote on which chili was best.  Both dishes were good and unique and the wines went nicely with them.

So what did the babysitter learn on this tasting.  She stated that when she began wine tasting last year she liked the sweeter wines.  Now after a year of wine tasting and education, she prefers the dryer wines.  No preference on red or whites.  She liked the chili wine pairing and it was difficult for her to make a decision to vote on as well.