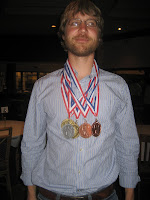 I’ve known Kristop for many years, back when he worked at Millbrook Winery. That is where we met and  his career in the wine industry began. He then made the move to Benmarl and apprenticed under Eric Miller where he blossomed into the winemaker he is today.  When the Miller’s sold Benmarl to the Spaccarelli Family, Kristop became head winemaker.  He has won may awards for his wines as you can see in the above photo.

In a phone conversation with Kristop he said he “loves the Hudson Valley Wine Region” and does plan to return in the future.  He said he will miss the closeness of the local wine industry, but I think he will find the same where he settles.

To my friends and fellow bloggers in Washington State- treat Kristop and his family well. If you run into him during the WBC – give him a hug from me.

Kristop – I expect wonderful wines from you.  Paul and I will be out to visit!