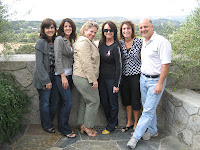 Not sure if I ever told you the story between me, Paul and Eric Flanagan. It all began at a wine tasting at Vintners Collective in Napa.  Paul was our chauffeur for a bachelorette party.  My friend Diane was getting married (she lives in the Bay area) and he was driving the 5 of us around and was a great sport about it. (Yes I have the best husband!) 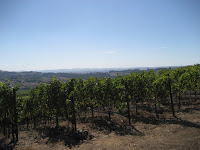 The last stop of the day was Vintners Collective and we had a tasting out on their deck.  We tasted all reds because the crowd  I was with was a red crowd.  After the tasting we were all mingling with the other people on the deck and I started talking with Eric Flanagan.  Paul came over and Eric and Paul really hit it off.  We were invited to his winery in the Bennett Valley which we went to after out tasting a J Vineyards.  An email with the gate code found us climbing a mountain, opening two gates and reaching the top where we found Eric and his winery. 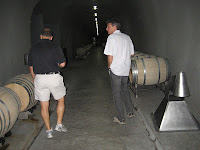 He has a really impressive place!  We actually did taste this 2009 Chardonnay prior to its release during this visit.  That was in 2010.  When the wine was released we purchased a couple of bottles and opened one a few weeks ago. 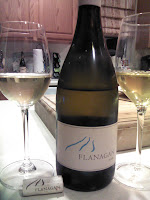 The Chardonnay was beautiful, elegant and romantic.  Layers of pear, honeysuckle, butter and oak filled the glass.  Just the aromas put a romantic feel on the evening.  The wine was very nicely balanced with nice expression of the fruit.  Apple and butterscotch were dominant with a nice citrus lime finish.

I think this was the last Flanagan Chardonnay. Might have to begin to test the reds.