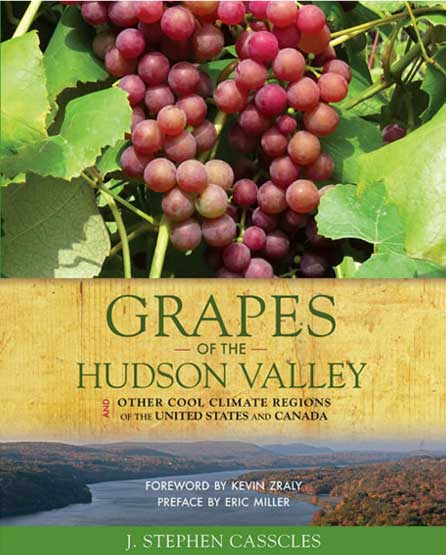 My first meeting with Steve Casscles was in his vineyard in Middle Hope, New York.  I was sent there to pick up wine for the wine competition.  It was a beautiful day and Steve was working hard in the vineyard.  That day not only did I pick up competition wine, I got a bit of education in the vineyard and a 1994 (I think that was the year) bottle of Baco Noir.

That was when I became a Baco Noir fan.  Not only from the current releases of Baco, but I saw how nicely the wine ages.  I was sold and forever a Baco fan.

Steve’s book not only covers the grapes of the region, but goes into the history of the Hudson Valley Wine Region. With that reveals how his family was involved with the various fruit growers in the area.

This book is a great guide not just on the grapes but on picking a vineyard site, vineyard management and winemaking. He gives you points to consider when pruning, the different types of pruning methods and training systems.  Controlling the diseases and what grapes are susceptible to the different diseases and the cold.

If growing isn’t your thing and you want to be involved in the winemaking side, Steve goes in depth on winemaking. Everything from the equipment you will need, the process, the bottling, the different styles of wine to what can go wrong during the process.

What really shines as it should are the grapes and the people who were involved in growing and creating them. I never realized there was a grape called Walter or Poughkeepsie, Burdin 6055, Burdin 4672 and White Burdin, I can go on.

If you want to learn about the grapes, the hybrids, and their wine quality this is the book.  The most informative book out there.

Not only did I learn something about the grapes, but about the people who developed them, their history and at some points during the book, I actually knew the landmarks and homes spoken about.

Congratulations Steve, a book well done and should be included in all enology and viticulture programs.