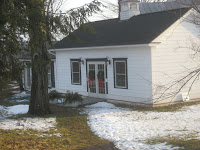 During the Holidays while out shopping for a dishwasher and fridge, I headed up Route 9 and kept going until I arrived at Hudson Chatham Winery. They are Columbia County’s first winery. This was the last weekend they were open for the season, so we were just in time. They will re-open in April. Their address states Route 66, however my GPS said Route 66 didn’t exist. It’s HWY 66 according to my Garmin.

Hudson Chatham Winery is situated on the former Brisklea Farms 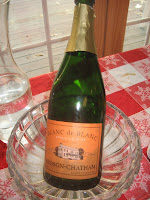 Ayrshire Dairy. Beautiful views stretch from the tasting room of the Berkshires and Catskills. The winery is housed in the original 1780’s farmhouse.

Upon entering their tasting room we were warmly greeted by Dominique and her tasting room staff. They were having an event on that Saturday “Bubbly Endings and Beginnings,” of course, that meant “Champagne” for everyone. A Mimosa was made for us using their Blanc de Blanc and some orange juice. Their Blanc de Blanc is a semi-dry sparkling wine made from Cayuga grapes.

Once the tasting bar cleared a bit, we bellied up and started tasting the rest of the wines produced by Hudson Chatham Winery. We began with their Seyval Blanc. The Seyval grape is a French American hybrid that grows very well in the Hudson Valley Wine Region. It produces good sugar and acid balance in the wine and used alone as well as blended with other varieties. This Seyval Blanc delivers a fruity nose and a dry and lemony finish that sits in the back of your mouth.

The next wine we tasted was “the big tasting tease!” A Gewurztraminer they were sold out of. It was a wonderful, light wine with floral on the nose and a smooth finish. Would have purchased some if they had it in stock. 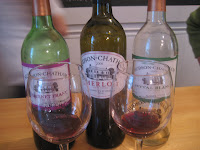 Following the Gewürztraminer we moved to the reds. Unfortunately we weren’t able to taste their Baco Noir which I heard was wonderful. This wine was sold out too. You might not be familiar with the Baco Noir grape, as it’s another French American hybrid that grows very well in the Hudson Valley Wine Region. The Baco Noir grape produces a medium bodied, deeply tinted red wine with aromas of vanilla and chocolate. I often think it has a smoky finish, but that depends on the winemaker.

Since the Baco was a bust, we moved on the the Cabernet Franc. Cab Franc is one of my favorite varitials. This Cab Franc was aged in French Oak for 8 months and received a 84 point rating from Wine Enthusiast Magazine. Kudos to Carlo.

As we moved on the next up was a Malbec. This was aged in French Oak for 8 months as well. It was light in complexity with earthy tones. Next was their Merlot which won a Silver Medal at the Hudson Valley Wine Competition in April 2008. It was also rated an 85 by Wine Spectator Magazine. The Merlot was aged in French Oak for 18 months. It was medium in complexity with hints of dark berry and vanilla. 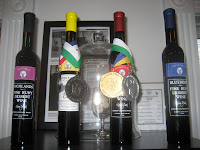 After our tasting we even had time to hit the Sears Appliance Store in Hudson. It had the best selection of dishwashers and fridges we saw that day.

We ended our day at Mexican Radio on Warren Street in Hudson for some fantastic mexican food.