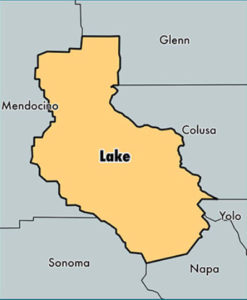 Where is Lake County? Lake County is located north of Napa County, east of Mendocino and Sonoma Counties. What’s special about Lake County is it has all four seasons and that is what Jed Steele loves about the area. He was also very impressed with the quality of the grapes being grown in the region. The two most widely planted grapes in the region are Sauvignon Blanc and Cabernet Sauvignon.

Jed, celebrating 50 years of winemaking was not originally from California. Actually he lived in New York and moved to California at the age of 5. His father was a copy editor for the New York Times and won a bet on Stymie and that afford him to move the family out to California. In his early years,Jed made wine for Stony Hill Vineyards, Edmeades and Kendall-Jackson. Jed is humble but most famous for developing the concept and style of Kendall-Jackson’s Vintner’s Reserve in 1982. A development he says was actually developed by mistake. Sometimes your best mistakes turn out to be wildly successful.

In 1991 Jed went out on his own and created Steele Wines. He produces 4 labels under the brand: Shooting Star, Steele, Steele Stymie and Writer’s Block. Each label has its own unique story.

What do you think of a shooting star? Shooting Star is named after Jed’s middle name Tecumseh, a Shawnee Chieftan born during a meteor shower. This was one of the first two labels he created. Under the Shooting Star label we tasted the 2017 Lake County Sauvignon Blanc.

This beautiful Sauvignon Blanc was sourced from Dorn Vineyards in Kelseyville. The grapes were picked early in the morning, crushed and pressed. Then fermented in three small batch stainless steal bins. This was such a elegant and balanced Sauvignon Blanc. With a beautiful nose of white grapefruit, citrus zest and pineapple leads to an elegant plate with grapefuit, pineapple and tropical fruit. SRP $15

Under the Steele label we tasted the Steele 2016 Chardonnay Cuvee. The Steele Chardonnay for this wine is sourced from three vineyards across three coastal counties. The Santa Maria Valley vineyards Bien Nacido and Goodchild come from a maritime climate and contribute the tropical character to the wine. Sangiacomo, Durell and Parmelee-Hill vineyards located in the southern part of Sonoma County in the Caneros AVA contribute the citrus character and acid to the wine. The crisp apple profile that is in the Chardonnay comes from the Lolonis Family vineyards in Mendocino County. It’s blended together to create this really nice Chardonnay. The 2016 Steele Chardonnay Cuvee has nice tropical aromas coming from the glass that leads to a plate full of mango, pineapple, green apple and citrus. A very delightful Chardonnay. SRP $24

Writer’s Block is a collaboration between Jed and his son Quincy. Quincy double majored in history and English and this is his tribute to his love of writing and wine.Quincy focuses on the bright fruit in this Cabernet Franc and keeps the tannins in check to deliver a beautiful expression of the grape. The Cabernet Franc is grown in the High Valley AVA of Lake County. Writer’s Block Cabernet Franc 2015 is aged for 15 months in French and French American hybrid barrels.{ Hybrid barrels is a new term for me. These barrels are made by alternating French and American staves. You can mix American, Hungarian or French however you want. They are made in Missouri by World Cooperage.} Layers of aromas come at you from the glass. You have cherry, plum, cigar box, black raspberry that leads to a complex palate of black cherry, black raspberry, earthy notes mid palate and some licorice on the finish. As the wine opens you get a black pepper zing on the finish. It’s a very nice easy drinking wine SRP $17

Stymie, the horse that changed the Steele’s life. Not that I endorse betting on horses, but this was a win for the family that gave them the financial freedom to move from New York to California. There are two wines made under the Stymie label, a Syrah and Merlot. Both grape varieties are estate grown and Jed expression of the best of Lake County. The grapes for the Syrah come from Jacobsen Vineyard on Jed’s property in Kelseyville that he planted in 2002. A small amount of Syrah comes from Fiora Vineyard . The 2016 Steele Stymie Syrah is aged in oak barrels for 22 months. There is a little bit of smokiness on the nose with hints of jammy red raspberry. The palate had notes of blue and black fruit, plum with a hint of earthiness on the mid palate and a subtle black pepper spice on the finish. SRP $38

Steele wines are available in 47 states. Just ask for them in your wine store.