Hard cider is making a statement and growing.  In the last year domestic sales of cider were up 23% to 5.7 million cases. The big boys have seen the craze and entered into the market.  Angry Orchard Cider is produced by Boston Beer (Sam Adams), Michelob is producing an Ultra Light Cider and MillerCoors owns Crispin Cider.  But nothing beats drinking a local hard cider in the fall hand crafted at a local winery. 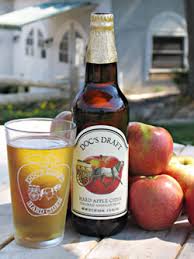 Applewood Winery in Warwick just launched their Naked Flock brand of ciders. Their original Stone Fence Cider has run away to join the Naked Flock as the Naked Flock Original. They have crafted a Pumpkin Cider made with fresh roasted pumpkins and his Draft which is fermented with Belgian Trappist Ale yeast and smoothed over with a touch of organic Maple Syrup.

Brand new to the Hudson Valley is Kettleborough Cider House located at Dressel Farms in Gardiner, NY. Launched in September, his cider is fermented dry and then cider is added to bring up the flavor.

New York City and the Hudson Valley we are celebrating Cider Week which takes place October 12-21, 2012.  Now is your chance to get out and taste and support local cider. A list of local hard cider producers can be found  at http://www.ciderweekny.com/cider-makers.

There is a slew of events taking place from cider tastings to pairings to dinners during the week.  A list of events can be found at http://ciderweekny.com/events

Go out and enjoy some local crafted Hard Cider!