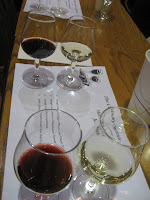 We are so fortunate to live in the Hudson Valley with so many great restaurants and the school where many of the great chefs began – The Culinary Institute of America.  Every winter the CIA offers a “Winter Dining Series” and this is a series of lunches and dinners focused on educating you on wine, beer and spirits.

We usually try to go to at least one or two of the wine dinners.  This year in January we attended the Joseph Carr dinner.  Joseph is a real funny guy.  We first met him at the NY Wine Expo 4 or 5 years ago.  This is his second time being included in the Winter Dinning Series.  Joseph is a New Yorker.  He grew up just outside of Albany.

The evening begins at the Danny Kaye Theatre where Joseph talks to us about his wines and we got to taste 4 of them.  From my crib notes:

After the seminar we walked across the street to the American Bounty for dinner.  The first course was a Ginger Lemongrass Broth, with Poached Shrimp & Cilantro.  They served it with two whites – the 09 Sauvignon Blanc and an 09 Josh Cellars Chardonnay, North Coast.  The sauvignon blanc paired very well with the soup, the chardonnay did not.  The chardonnay got lost with it. It didn’t blend to well with the coconut milk.

The next dish was a Citrus Salad of Fennel and Frisee, Blood Oranges & Candied Almonds, paired with Joseph Carr Reserve 2008 Sonoma Coast Chardonnay.  The salad was great, the wine was good, but not together.  The citrus in the salad just didn’t do well with the wine.  A pairing gone wrong which surprised me at the Culinary. 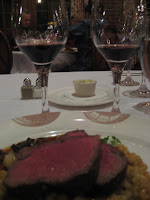 The main course was Roast Dry Aged Strip Loin, Creamy Butternut Farro & Wild Mushrooms paired with Joseph Carr Merlot, Napa Valley 2008 and Joseph Carr Cabernet Sauvignon, Napa County 2008.  Both wines were nice, but I felt the Merlot paired better with the beef.  The merlot had a cassis nose and palate of cherry, coffee and spice.

We did have dessert but no pairing with it.  It was a Lemon Meringue Tart.

I enjoyed the wines of the evening, but was a bit disappointed in how the chef paired the wines.  We are attended a North East France wine dinner this month, so hopefully the pairings be better.