Looking for Harvest at the Cape May Wineries

I decided to continue with the theme this week as Cape May since I am now a resident down here.  On Saturday I set out to check out some of the wineries to see if I could catch a glimpse of harvest.  Well that wasn’t in the cards for me.  In fact Saturday was the quickest wine tour I ever did.  Three wineries and home in an hour and ten minutes.

I decided to begin around 11am when the wineries open.  I didn’t want to get there in the thick of things and thought maybe I would get some kind of tour of production facilities, see what’s going on.  I guess I really have to find out who to contact and make an appointment.

My morning began at Willow Creek Winery.  They are pretty new having just opened in January.  We stopped in for a tasting when we were down here house hunting. (you can read about the experience, just click here.) I was really looking forward to gaining more knowledge about this winery. 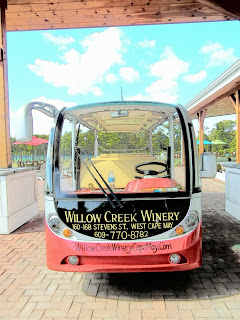 When I entered I went to the tasting bar, introduced myself and told them what I was looking for. She said they weren’t harvesting, crushing or doing any winemaking today. She said I could take a tour and/or have a tasting.  The tasting menu was small so I opted for the tour.  She told me I could wait outside by the bus.

It is a beautiful place and I sat outside until a women came out and said who is here for the tour.  Three people came out of the tasting rooms and said they were.  I said I was and she asked if I wanted a tour or tour and tasting.  I said just a tour.  She told me the price was $15.  Unfortunately that wasn’t in the budget for the day and I thought it was pretty hefty fee. (A gentleman standing there turned to me and said I don’t blame you.  I think he was the bus driver)  I left and went on to the next winery, Hawk Haven.

I was excited to visit here as I had read on Facebook they had just released their 2012 Chardonnay and it was on the tasting menu for today.  I also wanted to taste their Petit Verdot. 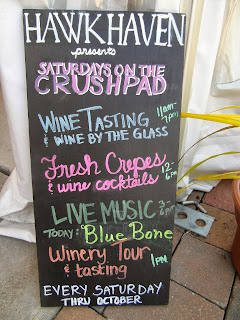 When I entered their tasting room, the gentleman I spoke with informed me they weren’t doing any harvesting, crushing or winemaking today.  They were having events on the crushpad and music that begins at 3pm.  Guess I was an early bird.  He told me they don’t taste the Petit Verdot, would have to purchase the bottle but they had 2 Chardonnays to taste, one stainless, one oaked.  I told him I wanted to taste the Chard they just released. He poured me both Chardonnays. 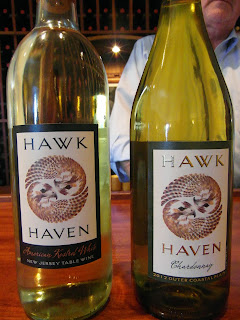 When I asked to take a picture of the wine he said it was for personal use only.  I told him, I was a wine blogger and I would use this picture on my blog. He kind of shrugged and told me he was being a “smartass attorney.” So if you are reading this and there are no pictures of the Chardonnay, you know I was contacted to take them down.

I liked both Chardonnays.  The unoaked had much more expression of the fruit than the oaked did.  I expected the oaked to be a bit more heavier than it was.  It was enjoyable and had nice hint of butterscotch lingering on the finish.  By the way, it was the oaked Chardonnay that they just released. 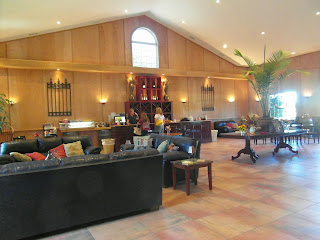 The last winery on my schedule (because I had some other things to do) was Cape May Winery.  This was the friendliest winery visit of the day.  The woman that greeted me had a lot of knowledge of what was going one. They weren’t harvesting, crushing or doing any winemaking, but they had been busy all week on the crush pad. They had harvest Chardonnay, Pinot Grigio and Syrah.  She brought John into the conversation and he told me they will be harvesting Cabernet Franc this week.  The brix reading was up to 24 already.   I’ll be around here Friday morning so maybe I’ll stop by and see if I can find some action.