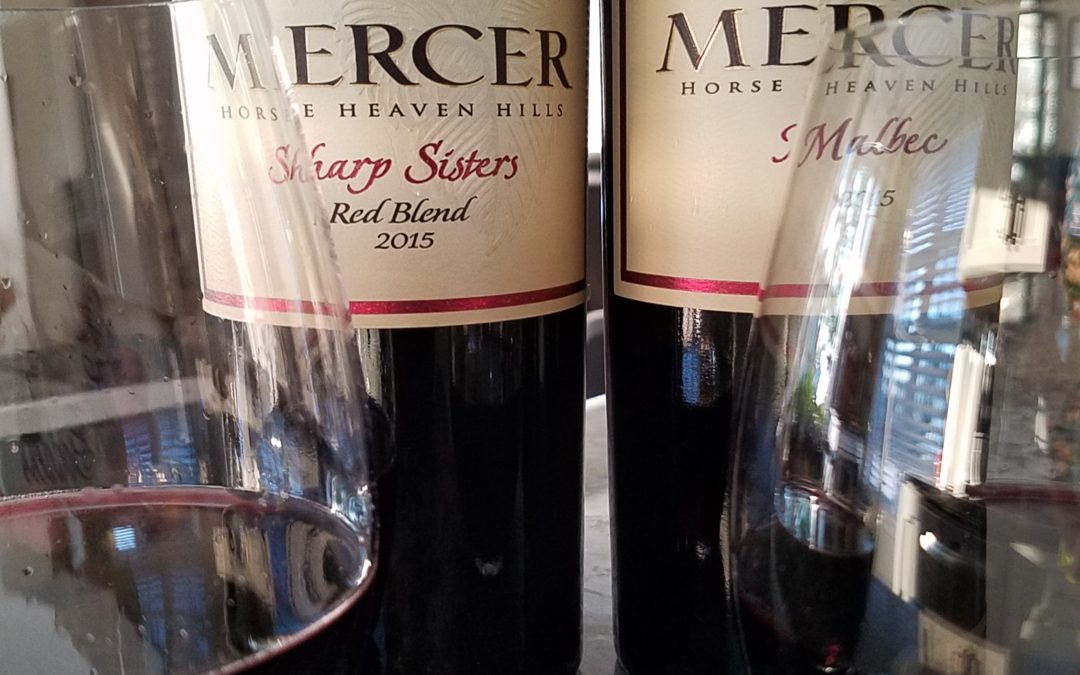 It all began in 1747 when Hugh Mercer, a Scottish Highlander came to the United States. He died in the Revolutionary war and left behind five children. One of the offspring of those five children were Willis Mercer who headed west in 1886 and settled in Prosser, a town in the Washington Territory which then became Washington State. They began by herding sheep, lamb and growing row crops. In 1958 the family operation grows and Mercer Ranches is incorporated.

In 1972 Don and Linda Mercer became the first grape growers in Horse Heaven Hills. They planted Cabernet Sauvignon in Block 1, and this Block will later become Champoux Vineyard.

The first vintage produced by Mercer was in 2005, when they produced a Cabernet Sauvignon and Merlot. Today they oversee 2000 acres of vineyards in the Horse Heaven Hills AVA and produce four distinct labels with the Eagle & Plow dedicated solely to charity as a result of 911.

Eagle & Plow was created as a result of the devastation of 911. Mercer Estates’ Vineyard Manager, John Derrick lost his best friend on Flight 93 and Rob Mercer, owner of Mercer Estates who served as a captain in the US Marine Corps reenlisted, leaving his young family behind and served in Iraq. When he returned, Rob and John planted a special vineyard – BLOCK 93 – on the Mercer Farm to serve as a memorial for fallen heroes and a means to give back to programs that benefit those who served and suffered. 911 vines were hand planted in BLOCK 93 of the Cavalie Vineyard. Eagle & Plow BLOCK 93 Cabernet Sauvignon was born and 100% of the revenues from this wine are donated to charities that serve American servicemen and women, their families and survivors of tragic events.

The Mercer Canyons label honors the history the Mercer family brings to the Horse Heaven Hills AVA. The grapes are sourced from their estate vineyards and reasonably priced between $10 and $14.
Mercer Reserves
The Mercer Reserves are produced from the best vineyard block and barrels. They are pressed using a gentler basket system and are aged in new French Oak. Mostly reds in this lot with one white, a Chardonnay. Prices range from $32 to $42

The Mercer Reserves are produced from the best vineyard block and barrels. They are pressed using a gentler basket system and are aged in new French Oak. Mostly reds in this lot with one white, a Chardonnay. Prices range from $32 to $42 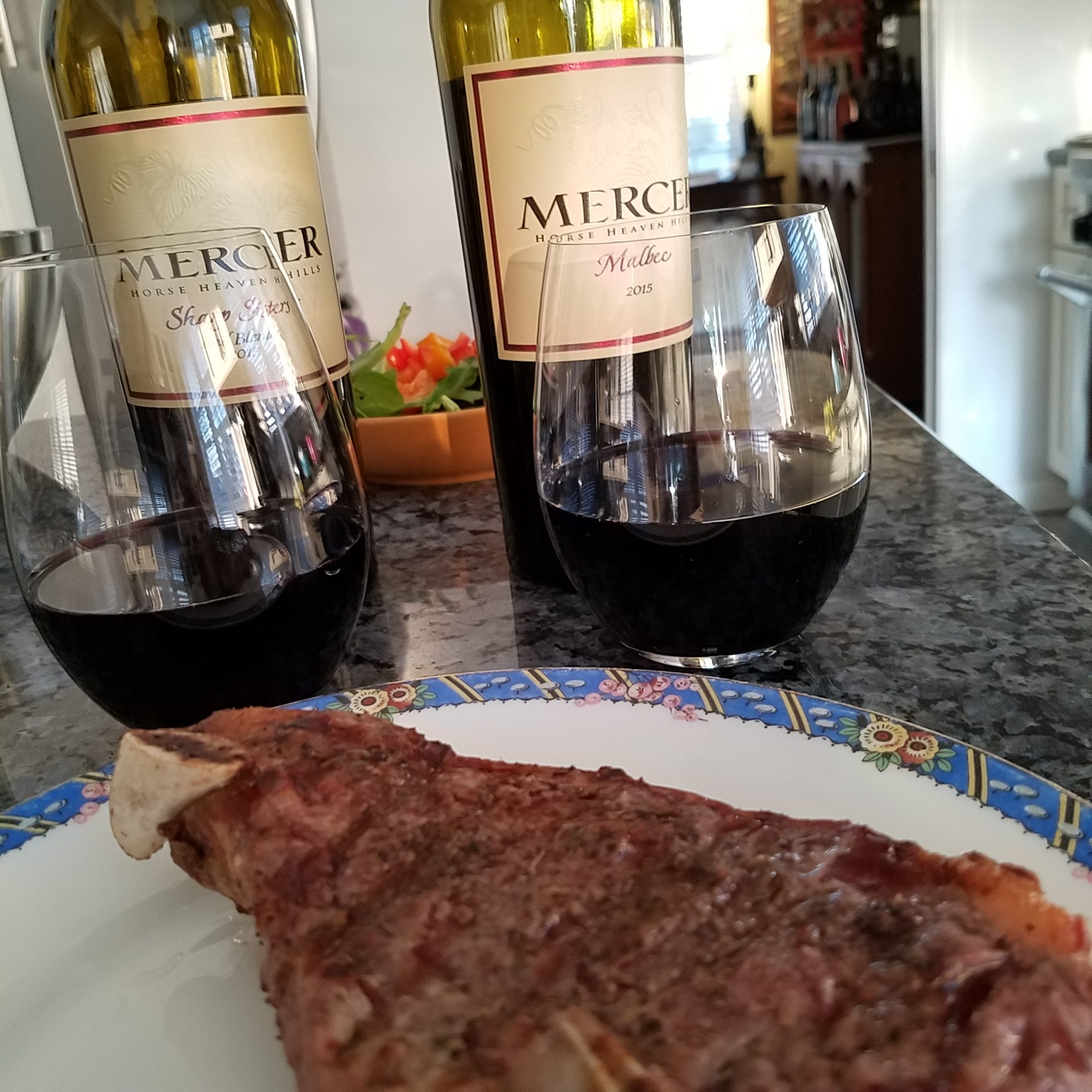 Mercer Estate wines are produced from Horse Heaven Hills and Yakima Valley.  There are 17 wines in this portfolio ranging in price from $12 to $32.  I had the opportunity to taste three of the wines from this portfolio. I have to apologize, I am a bit late with this tasting as the wines were sent to me as a sample this time last year. However, this shows how well the wines age, yes, even the Sauvignon Blanc. 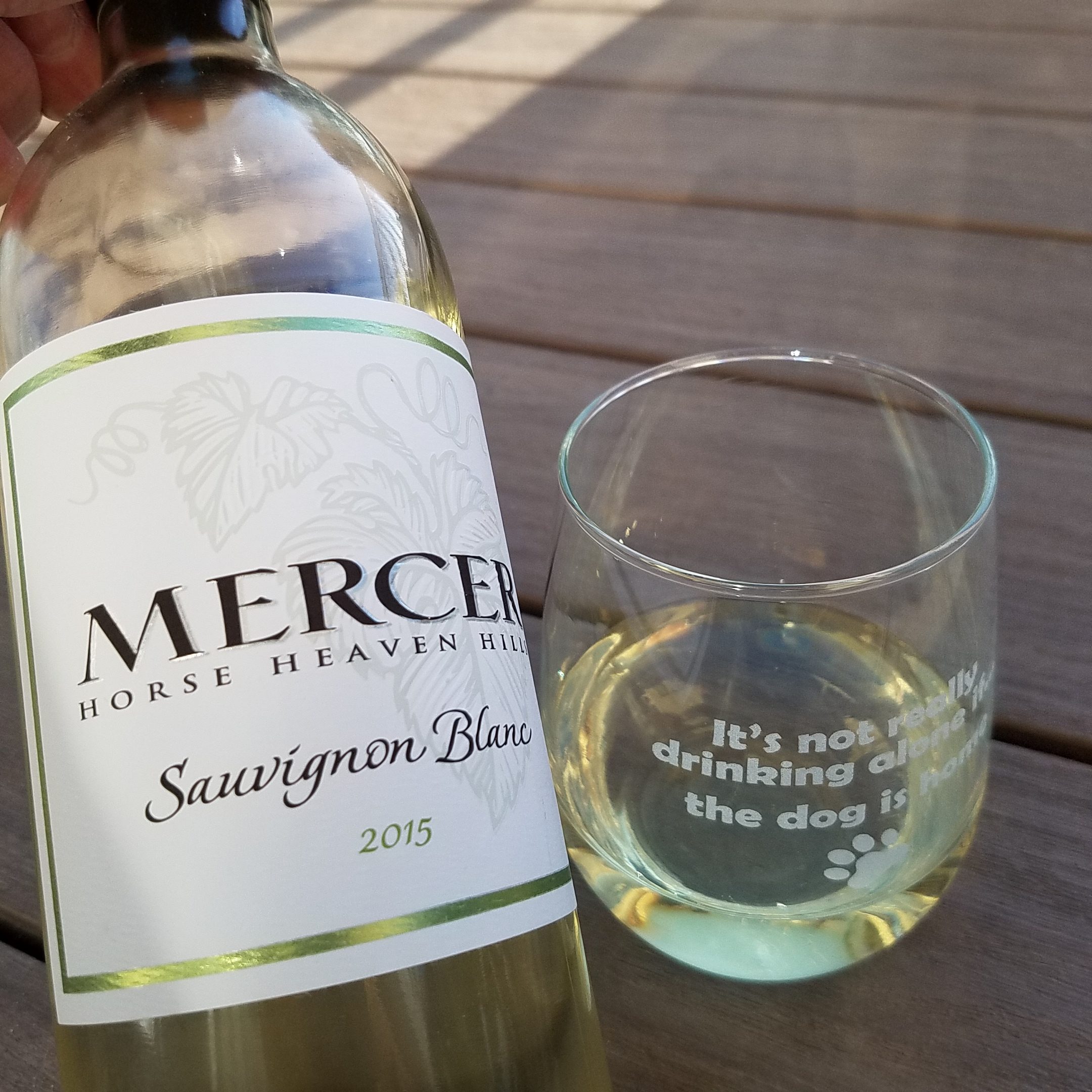 I generally think to drink Sauvignon Blanc young, within a year of it being produced. I was skeptical opening up a 3 year old Sauvignon Blanc and I was taken a back on how delightful it was. Notes of fresh cut grass, lime zest an passion fruit filled the glass. One sip with pineapple, pink grapefruit and tropical fruit had me smiling. The wine is not overly acidic, clean and crisp and just a delight to sip on.  The grapes come from the Princeton Vineyard and the wine retails for $15 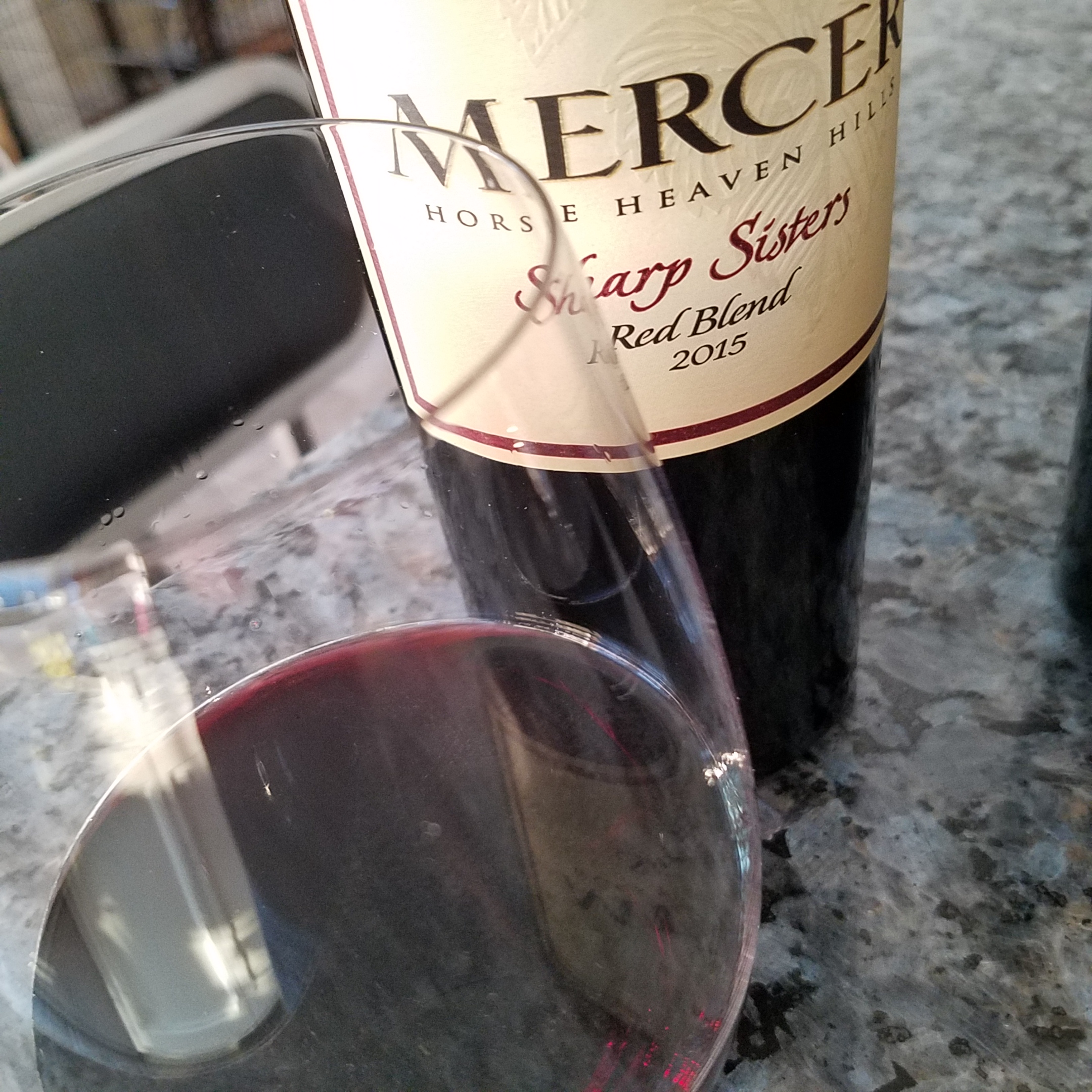 2015 Mercer Horse Heaven Hills Sharp Sisters is a red blend consisting of 29% Cabernet Sauvignon, 27% Syrah, 18% Merlot, 14% Petit Verdot, 10% Grenache and 2% Carignane. The color of the wine was extremely dark and full of ripe dark fruit. Soft tannins makes this wine elegant yet the fruit forwardness of the ripe blackberries, plums and other dark fruit make it striking.

The wine was fermented in stainless steel tanks then aged in French and American oak where malolactic fermentation took place. The wine was aged for 18 months in barrel separately then blended together and bottled.
It retails for $22.99 I had paired it with a ribeye and it was a bit to overpowering for it. 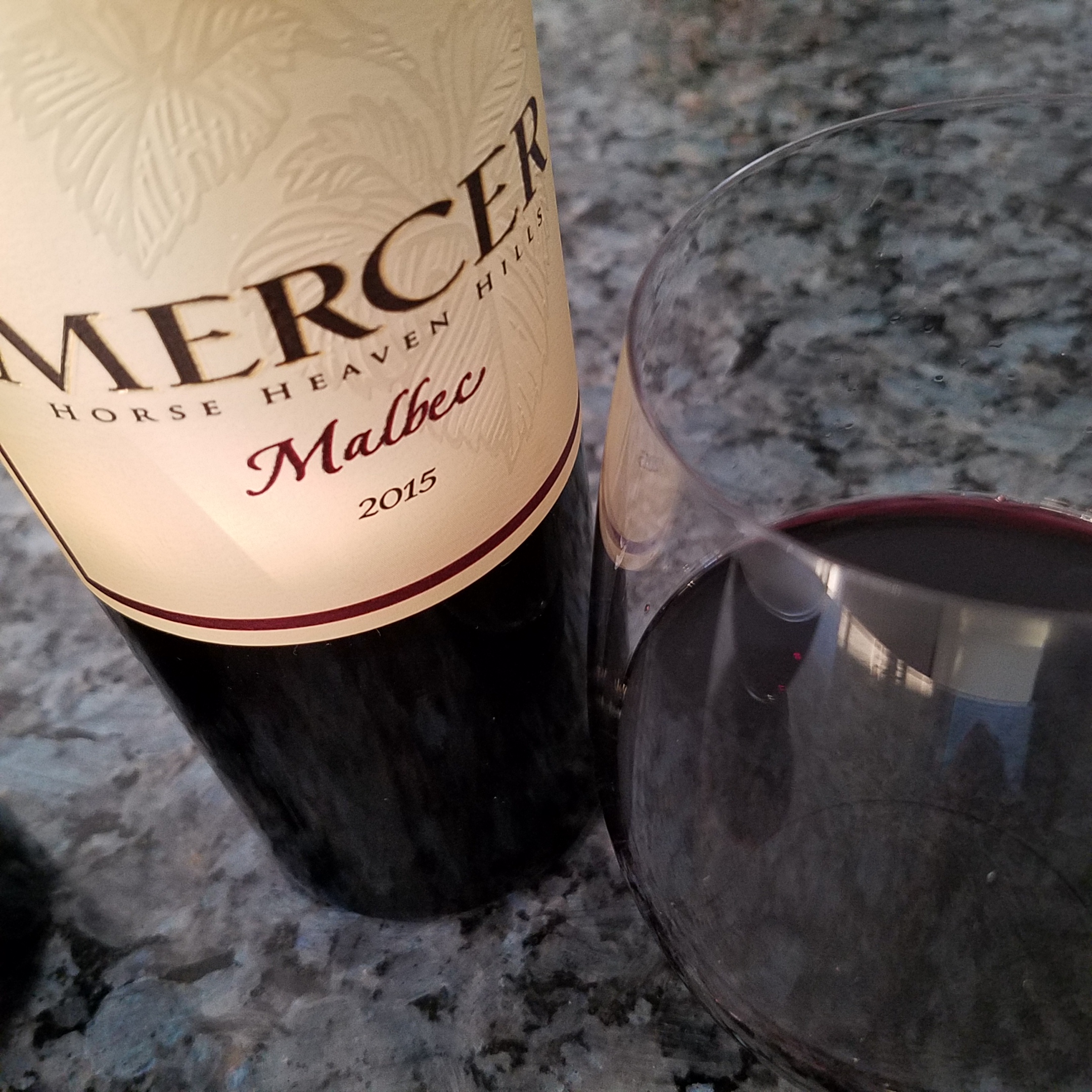 2015 Mercer Horse Heaven Hills Malbec is a blend of 78% Malbec and 22% Cabernet Sauvignon from their Cabinet Vineyard. The wine was fermented in oak upright tanks. After fermentation the wine was aged for 18 months in new and old French oak barrels, then blended together. Aromas of cigar ash, black cherry, plum, and black cherry and a hint of earthiness escape from the glass. Your palate is filled with black cherry, plum, subtle tannins and finishes with hints of baking spices