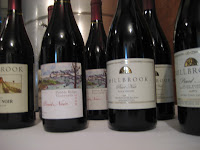 Millbrook Vineyards & Winery is located on 130 acres in Millbrook, New York.  Formally a dairy farm it now produces 13 acres of Chardonnay, 5 acres of Pinot Noir, 7 acres of Cabernet Franc and 5 acres of Tocai Friulano.  They produce between 10,000 and 12,000 cases a year.

For the first time this past November, Millbrook Vineyards & Winery opened their doors and all their wine for a special tasting.  It was the first time you were able to taste the entire family under one roof.  Do to all the wines at this tasting, I will highlight a few from each station.

We began at the Aromatic/Fruity Wines station where there were 2 New York State wines and 3 Central Coast, CA wines.  We began with a Millbrook 2004 Brut Proprietor’s Special Reserve which was a blend of the classic grapes in Champagne – Chardonnay, Pinot Noir & Pinot Meunier, fruity and not to dry. Central Coast, Hunt Country White that is blend of 52% Riesling, 32% Pinot Grigio, 16% Gewurztraminer and has 3% residual sugar.  The Gewurztraminer definitely came out on the nose.

Next table was all Chardonnays, 2 Central Coast, CA, 2 Hudson River Region and 1 New York State.  This was the first time I got to taste anything from Pebble Ridge.  The 2008 Pebble Ridge Chardonnay, Central Coast was 2/3 tank fermented and 1/3 barrel.  It had a nice pear nose with hints of apple. 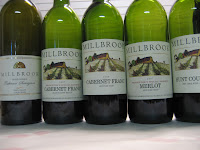 We then moved to the reds and began with the Pinot Noirs.  1 NYS, 1 Central Coast, CA and 1 Hudson  River Region. The 2007 Millbrook Grand Reserve Pinot Noir, Central Coast, had a nose with hints of clove that showed up strong on the finish.  Other flavors that came to the palate were cherry and raspberry.

Bordeaux Blends were next with 3 NYS, 1 Hudson River Region and one Napa Valley, CA.  As much as I love Cabernet Franc for years I have friends who always rave on Millbrook’s Hunt Country Red, so that will take the spotlight here.  This is  New York State blend with 58% Merlot, 26% Cabernet Franc, 8% Zin and 8% Cabernet Sauvignon.  This is a dark fruit wine with earth and plum on the nose, opening to black raspberry, and plum on the palate.

The last two tables were Williams Selyem and Villa Pillo. At Williams Selyem there were 3 Pinot Noirs and 2 Zinfandels all from California.   One that stood out as the 2008 Feeney Zinfandel, Russian River Valley, CA.  This had aromas of blackberry and toffee.  The palate was jammy with raspberry, blackberry and finishing with coffee.  Off to Italy where there were 5 tuscan wines.  The 2008 Borgoforte, Tuscany, Italy is Estate Bottled made with 50% Sangiovese, 10% Merlot and 40% Cabernet Sauvignon.  This is a nice smooth silky wine with black cherry and licorice on the palate.

After all the wine tasting the very last table was the cheese man.  He had some wonderful cheeses to compliment the wines.

Millbrook did a wonderful job showcasing it’s portfolio at this tasting.  I look forward to next years event.