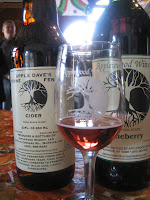 I attended Applewood Winery’s ‘Hard Cider Experience’ on November 14.  It was a nice event, and also included apple wine pairings as well.  The one thing I found missing was the winemaker talks and it stated on their website there would be some.  I was there for 2 hours, maybe I missed it.  I was kind of interested in hearing how they make hard cider, how may bushels of apples it takes, the fermentation process etc.  I guess I will be educated at a later date. 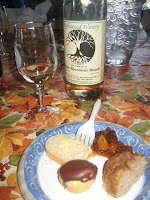 The tastings took place in a building across from the tasting  room.  They had live music and two tasting tables.  One tasting table was the sweets, the other the savory.  Being that I am someone who will have cake for breakfast, I ended up beginning at the sweet table.

The first wine tasted was the Apple Blossom Blush and it was paired with Gouda cheese on a piece of french bread and some fruit compote.  The wine had a nice cinnamon and spice aroma.  It tasted like apple pie.  It did pair very well with the cheese and fruit.  Next pairing was Harvest Time – which was served warm.  It was noted that this wine can be served cold, warm or at room temperature.  It was paired with a pumpkin spice cake.  The wine had aromas of apple cinnamon and cloves.  Once again it paired very well with the cake. I personally am not a fan of warm, mulled wine, but this was a nice wine to sip in front of the fireplace during the holidays.  The last tasting at this table was Apple Dave’s Stone Fence Cider blended with Applewood’s Blackberry Wine paired with a cream puff.  The cider is sweetened with local honey.  The pairing was nice.  The cider had the flavors of apple and blackberry, with a sweet touch. 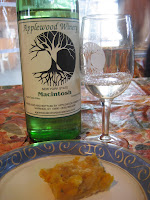 On to the Savory table where I was served Apple Macintosh Wine with a butternut squash tart.  The tart was great and it paired very nicely with the wine.  Maybe that’s because the tart was made with the wine.  Next was some black been soup paired with Apple Dave’s Stone Fence Cider.   The pairing ended with a tart paired with a mix of Apple Dave’s Stone Fence Cider and Applewood’s Blueberry Wine. The tart had was infused with the blueberry wine which was a nice touch to end the tasting. 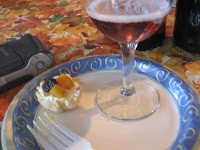 I must say, Suzanne is a wonderful chef and her pairing were perfect.  Can’t discount the winemaker either.  I am not that crazy about Apple Wine, but when paired with the food it was quite good.    I liked the cider infused with the berry wine, as it is a nice touch.  If you don’t like Champagne, you should try the cider, it might be a nice alternate.