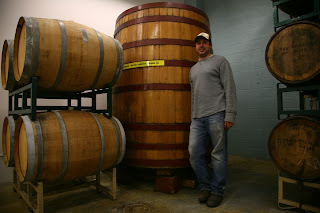 Ships are traditionally christened with a smashed bottle across the hull, and it appears new bottling facilities are baptized with broken glass as well. Captain Lawrence Brewing’s recent move to package its brews in six pack form for the first time in its six-plus year history was not without some hiccups.
Sticky, messy hiccups. “We had a rough start the first few days,” says owner Scott Vaccaro, stemming from a loose part in the capping cylinder. “It took a while to diagnose the problem. We were smashing bottles left and right.”
Scott says close to 100 cases, including flagship Freshchester Pale Ale and Liquid Gold, ended up sacrificed over a couple harrowing days in mid-March. “Smashfest,” he says with a shake of the head.
The problem was ironed out a few days later, and those six-packs started rolling off the line. Look for the Pale Ale, Liquid Gold and Kolsch, at around $9.99 a sixer, in New York metro delis, supermarkets and distributors next week. “It’s exciting,” says Scott. “It’s what we’ve been working towards for years.”
Captain Lawrence’s new 19,000 square foot facility in Elmsford also has room for what Scott calls an “experimental brewhouse”, where he can whip up small batches of around 15 kegs apiece. The first batch will be brewed in mid April. Scott says another iteration of the popular Drew’s Brew—what he calls a “hopped up Kolsch brewed in an IPA style,” and named for his five month old son—is in the works. And while Captain Lawrence toasted its fifth birthday last year with a commemorative black barley wine dubbed “Five Years Later”, the brewery’s sixth anniversary came and went without its proper due. (Such are the perils of tending to a brand new facility, not to mention a brand new baby.)
Scott says he’s considering a black IPA (post-) birthday batch called “Six and Change,” and some other quirky brews. “We’ll see where we go from there,” he says.
The people of Westchester, and beyond, have been able to find the new 1,500 square foot tasting room. The Pale Ale remains ever popular among samplers, as has the rookie Family Meal–a Kolsch spiced up with ginger, clove, cardamom and cinnamon. The Family Meal reserve is running out, but Scott says he’s planning some new big-flavor mixtures, involving the likes of lemongrass and coffee, among other spices.
Smashed bottles notwithstanding, it’s been a fairly smooth move down the road from Pleasantville. “It’s a whole other world,” says Scott. “So far, so good.”
Captain Lawrence is open Tuesday through Friday (retail 2-7 p.m., and samples 4-7 p.m.); and Saturday, with retail and samples 12-6 p.m., and brewery tours at 1, 2 and 3 p.m.
The author is paid by Captain Lawrence, partially in beer, for Notes From the Tasting Room.
–Michael Malone