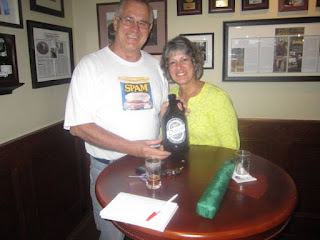 Whether they’ve learned it from their tour of the brewery or gleaned it from the website, most people in the tasting room seem to know that Captain Lawrence Brewing was named for Captain Lawrence Drive–the South Salem, NY street where founder Scott Vaccaro was raised and, more importantly, learned to brew beer.

Much less known is who the street is named for.

In fact, Captain Lawrence is an American war hero. So, in the spirit of Memorial Day, I posed a pop quiz to those in the tasting room, to find out who knew what about this historic figure. 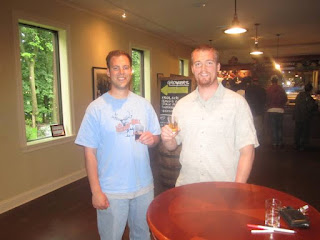 “I looked it up,” said Vinnie Crodelle of Harlem as he sips the Freshchester Pale Ale with Ryan Van Buren of Newburgh. “I should know this.”

“Captain Lawrence was a general,” continues Crodelle, who works for the DEP and is an aspiring professional fisherman. “Spanish-American War…No, French-Indian War.”

The buzzer sounds. Alas, the Captain was not a general, and did not fight in those wars.

Van Buren steps to the plate; if his historic name is any indication, perhaps he knows his history.

“He led George Washington upstate. Washington was unfamiliar with the area, so Captain Lawrence escorted him around.”

The buzzer buzzes again. On we go.

Around another barrel, Andrew Hrabsky of Putnam Valley and Erica Dziato of Ossining have much different notions of Captain Lawrence. “Captain Lawrence was a notorious pirate,” says Andrew. “He roamed the Caribbean.”

Erica goes nautical with her guess too. “A beer loving fisherman,” she says, and coiner of the phrase “There’s plenty more fish in the sea.”

The pair gets a few Liquid Gold samples as parting prizes, and I venture on. 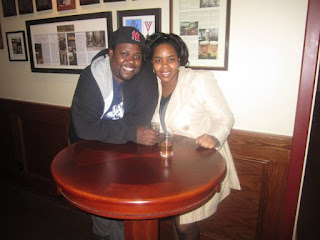 Though she’s several tables away, Tania Barclay of New Rochelle seems to have glimpsed the same cheat sheet as Andrew. “A pirate…a badass pirate,” she says. “He had one eye…Stabbed in the other eye with a beer bottle.”

Next up is a large group of fresh faced visitors around another table. Captain Lawrence was very definitely not “Captain Crunch’s long list brother,” but a sincere thank you to Audrey Smith of Tuckahoe for that guess.

Her friend Christiana Lloyd, a student from Waxahachie, Texas (try saying that after a few samples of Imperial IPA), gives it a whirl.

She’s the least wrong of anyone so far. In fact, Christiana has identified Captain James Lawrence, who did, in fact, captain the Chesapeake, and implored his fellow seamen, “Don’t give up the ship!” while fighting the Brits in the War of 1812. He died from his wounds following that battle and is buried in Manhattan.

“My father was a random facts guy,” Christiana explains. “He watched a lot of History Channel.”

Captain James Lawrence did a lot of great things, but does not, in fact, have a brewery named after him.

I wander over to Gary and Leeanne Boone, a pair of self described “nomads” from Detroit who, after retiring from Ford, sold their home last year and hopped in their RV, using Brewing News to find the best local breweries, and documenting their travels on boonedocksllc.blogspot.com.

So who’s Captain Lawrence? Gary mentions “Don’t give up the ship!” which he and Leeanne had seen inscribed on a wall at the Naval Academy in Annapolis a few weeks before on their travels.

Again, not the right Captain Lawrence.

They keep trying. Back on Lake Michigan, Gary and Leeanne explain, they knew a local character who was a sea captain and brewed beer. He was known as Captain Steve.

“We figured Captain Lawrence, like Captain Steve, went through the process of being a sea captain, and happened to be a home brewer too,” says Leeanne.

Her tongue is planted firmly in her cheek as she sips her Kolsch. See, she and Gary, who sports a crisp white Spam t-shirt as he samples a Brown Ale, have this road game they play called “gator tails”–or perhaps it’s “gator tales”–where they amuse each other by making up preposterous stories to explain various things they pass.

I break the news that Captain Lawrence was not, in fact, a beer brewing sea captain.

In fact, Samuel Lawrence was a captain in the Westchester County Militia during our war for independence, and is said to have faced off against the Brits in a bloody, and vital, battle in Ridgefield, Connecticut in 1777. He’s buried at Mead Cemetery in Lewisboro—a few miles from the street that bears his name, and a little bit more from the brewery that does as well.

—Michael Malone (malone5a@yahoo.com)
Captain Lawrence Brewing, at 444 Saw Mill River Road in Elmsford, is open Tuesday through Friday (retail 2-7 p.m., samples 4-7 p.m.); and Saturday, with retail and samples 12-6 p.m., and brewery tours at 1, 2, 3 and 4 p.m. The author is paid by Captain Lawrence, partially in beer, for “Notes From the Tasting Room.”