Shopping and Wine with the Babysitter

Yes..shopping and wine with the babysitter.  But…the babysitter is now all gown up now. Perhaps I should explain… Many years ago when I worked in radio I worked with Chrystal’s dad.  She was 4 years old when I met her.  As time moves forward, Chrystal was my lead babysitter when my kids were as young as 8 months old.  Fast forward 13 years and Chrystal get’s hired as my secretary at my day job.  Two years later she’s a product of “right sizing” as the VP of Marketing called it.  Don’t worry, she has landed on her feet and I have been teaching her about wine.

The day began in Lee MA at the Prime Outlets.  A little shopping in the morning, lunch in town and then we headed to Hudson-Chatham Winery for a tasting. No shopping trip is complete until you have a little wine! 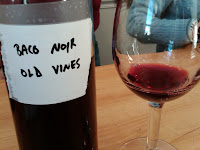 Much to our surprise we were treated to barrel tastings of the 2008 Old Vines Baco Noir and Empire.  Wow to both!  The Baco is going to be very good.  I am trying to convince Carlo to let the Baco sit a few years and let the wine age and mature a little.  He is talking about releasing some in the fall.  So, hint…if you are fortunate to purchase his 2008 Baco – hold onto it for a year or two before consuming.

The 2008 Empire was my favorite barrel taste!  This wine is going to be stellar!!!  Empire is a blend of three New York Wine Region grapes.  Cabernet Franc from the Finger Lakes, Baco Noir from the Hudson Valley and Merlot from Long Island.  There is a lot of dark berry going on in this wine.  The fruit from the Merlot and Cab Franc really stood out with a little hint of Baco.  In comparing it to the 2007 Empire, the 2008 is a richer wine with more complex flavors. Look for the release in late summer.  I am looking forward to a vertical tasting of the 2007 and 2008 from my wine cellar.

The last barrel sample we got to taste was the Cassis.  I felt like I was eating the black currants not to sweet with a hint of tartness. There was some discussion on whether it should be a tad sweeter.  For my palate I liked it as is, tart and not to sweet.  Being I am not in the norm…I think a tad sweeter would be best for everyone. I think people would feel the tartness and lack of sweetness would be a defect.

Chrystal received a great education Saturday and really enjoyed herself. I know she is looking forward to returning and bringing her friends to the winery.

To Chrystal’s dad who was wondering how Chrystal got interested in wine – HELLO- did you really have to think about it?