The weekend before Thanksgiving Paul and I found ourselves driving around the Hudson Valley and we stopped by Benmarl for a wine tasting.

Traminette has become one of my new favorite wines.  Honestly a few years ago when I first tasted it, I wasn’t impressed.  It has come a long way and the few wineries that produce Traminette do a nice job. 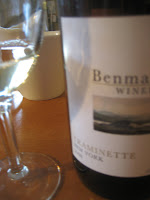 Benmarl’s 2008 Traminette is their third vintage.  It was very fresh with a lychee nose and flavor.  Also had a little citrus as well.  We purchased two bottles, admired the view and went home.

On Wednesday evening while preparing for Thanksgiving, Paul opened a bottle of the just purchased Traminette.  POP – FIZZ went the bottle- oops, this bottle is going through a second fermentation.  We now have a Traminette Sparkling Wine. We opened the second bottle and found the same. – POP-FIZZ.
Nothing went to waste, we did drink the new “Sparkling Wine,” and used in to create a nice sparkling wine sauce for the chicken dinner we were cooking.   It did lose some if it’s lychee and citrus flavors as the carbonation took over.
Why did this happen?  There was enough residual yeast and sugar left in the wine when it was bottled to cause it to go through this secondary fermentation.  Secondary fermentation can be normal in the wine making process, but not to the degree of creating a sparkling wine when not intended.
One of the causes that might have produced this secondary fermentation is the racking of the wine, or lack of it.  Racking of the wine is a term used when you siphon the wine off the lees (dead yeast cells) into a clean tank or barrel.  You then clean the original tank or barrel and siphon back.  This process helps in the clarification and stabilization of the wine.