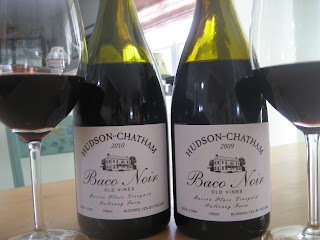 This is the tale of two Baco Noirs that I’ve been hording in my wine cellar for a vertical tasting.  Both the 2009 and 2010 Baco’s are produced by Hudson-Chatham Winery in Ghent, NY and made from Old Vine Baco at the Masson Place Vineyard, Pulteney Farm in the Finger Lakes.

The 2009 showed some nice black cherry, plum and tart cranberry on the nose with a little vanilla. The palate showed plum and dark berries.  The wine finished with some blackberry and a hint of pepper.

The wine itself was light in structure and slightly acidic.

Now onto the 2010 which nose was nice and fresh with oak, vanilla, cranberry.  It was smooth and nicely balanced with flavors of plum, dark berry and cranberry.  There was a hint of earth leading to prune flavors on the finish.

Overall both Baco’s were nice.  The 2009 had more structure and less acidity than the 2010, but that was to be expected.  There were stronger fruit flavors in the 2010 and the color was brighter and more intense.