The Food Experiments, the nation’s leading cook-off organization, is back with a 16-city National Tour sponsored by Brooklyn Brewery. They are making a stop in the Hudson Valley for The Hudson Valleyl Grill Experiment on October 14th, 2012.

What is the Food Experiment?  The Food Experiment features roughly 25 local amateur chefs who have prepared a unique creation incorporating the food theme. Celebrating the bountiful harvest of upstate New York and the crisp early autumn, the 2012 Hudson Valley Experiment will feature inspiration through grilling. Judging the Experiment are Gary Allen, “Dining In” columnist at Roll Magazine, Ray Bradley, farmer and owner of Bradley Farm, and Jeremy Kolakowski, executive chef of Rock and Rye Tavern. More judges will be released as the Experiment approaches.

The event is open to the public and is being held October 14 at the Rock and Rye Tavern, 215 Huguenot St. in New Paltz from 1pm – 4pm.  Tickets are $10 and include a Brooklyn Brewery pint and a plethora of culinary delights. Half of the ticket proceeds will go towards charities that promote sustainability and local culinary education for disadvantaged children and teens. 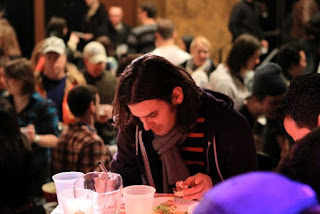 Everyone in attendance will have a hand in choosing which “cheftestants” will gain bragging rights,
cookware, bakeware, and cash from National Sponsors: Brooklyn Brewery, Le Creuset, Anolon,
Microplane and Wusthof knives. The Grand Prize Winner will bask in culinary glory city-wide and
earn a shot at the National Championships on December 16. The winner from each city’s Experiment
will be flown in to Brooklyn courtesy of Brooklyn Brewery to compete with the best of the best for a
chance to become The Food Experiments’ 2012 National Champion.

Are you an Amateur Chef and want to enter….Is your idea of cooking synonymous with charcoal, smoke and cross-hatch grill marks? Do you maintain a library of marinade and spice rub recipes? Is an Argentine parrillada with chorizo, pork chops and rib-eye steaks your perfect meal?  Or maybe you think squash, beets, flatbread and peaches all taste better charred over an open fire?  Every competitor gets $50 from a local supermarket to offset the cost of ingredients?

Don’t be shy! Click here to enter the competition NOW!