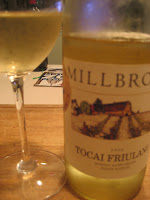 Salmon and Tocai Friulano – not sure if it’s what I would have pulled out of the cellar, but this was Paul’s night of cooking. All I did was purchase a wonderful piece of Alaska Wild King Salmon at Adams. Every now and then Paul likes to cook. So I kick my feet up and sip my wine and watch, sometimes direct him to supplies he needs.

Tonights dinner was Salmon, corn on the cob and a nice salad. Paul sauteed radishes, green pepper, onion, and garlic in seseme oil, soy sauce and a tiny piece of habanero pepper. He grilled the Salmon for a few minutes on the grill, then put it in some foil with the sauteed veggies, wrapped it up and put it back on the grill for a few until done. I will say it was very good!! He is becoming quite the chef!

Now onto the wine I was sipping while watching. Millbrook Vineyards 2008 Tocai Friulano. On the nose was kiwi and honeysuckle and very fresh and crisp. It had a hint of spice at the end at first along with a mineral taste and a hint of pear. As the wine warmed up (I think it was to cold) the pear flavor became more present. As the pear flavor dominated, it brought a smooth mouth feel to the wine. 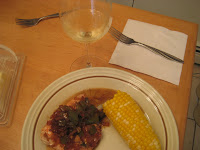 I am not sure if I would have served this wine with the Salmon due to the harbanero, but wine and salmon were gone in no time.