Last week I had the opportunity to participate in a virtual tasting held over twitter that featured three wines.

I found myself at the shore note knowing the neighbors but unfortunately nobody was home so I called Paul’s cousin Theresa who lives about a mile away. I needed to share these wines with someone.  So Theresa, Darren and Michael came over and I got to introduce them to the three wines and a twitter tasting. 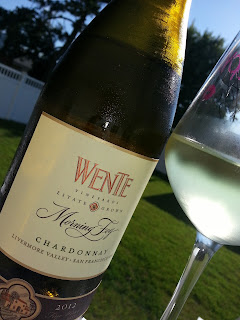 We began with the Wente 2012 Morning Fog Chardonnay.  This is becoming one of my favorites. I believe it’s a compbo of steel and oak.  It had a nice nose of lemon zest, apple and light toast and butter.  The palate had nice acidity with flavors of pear, pineapple and a soft oaky finish. This is a great summer sipper for $15!
The Garnet 2011 Monterey county Pinot Noir was next.  This was aged in 100% French oak with 60% of it new for 11 months.  I found this wine to be very fruit forward.  Fresh strawberries and blackberries with hints of vanilla, earth and spice.  This was Theresa’s favorite.  It retails for $14.99. 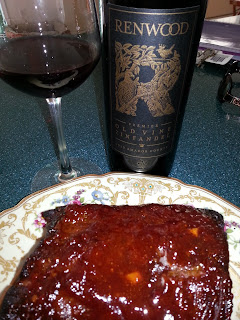 Then a summertime favorite…Ribs and Zin.  The only thing I wish I did was decant this 2010 Renwood Premier Old Vine Zinfandel, Amador County.  It was a great pairing.  It ran a little hot but the decanting would have taken care of that.  Aromas of black raspberry, plum cardamon and a slight hint of lavender.  The palate was full of dark fruit and spice.
I want to thank @WineTwits for allowing me to participate in this tasting.
Disclaimer: Wines were a PR Sample