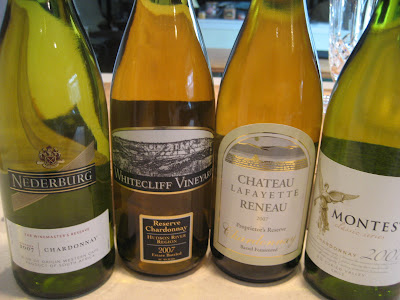 March assignment for Wine Blogging Wednesday was North vs. South. I originally wanted to do Rieslings, but the winery in the Hudson Valley that grows their own Riesling was all sold out. That presented a problem.

I decided to choose Chardonnays. I chose a 2007 Finger Lakes Chateau Lafayette Reneau (Proprietor’s Reserve) Chardonnay from the North, traveling down state to the Hudson Valley’s Whitecliff 2007 Reserve Chardonnay. Then I thought I would really travel farther south, I purchased a Chilean Chardonnay as well as a South African Chardonnay. I am never good at deciding. For the tasting I opened a 2007 Nederburg South Africa Chardonnay. (I’ll bring the Chilean to Wine night next Friday)

The Chateau Lafayette Reneau Chardonnay we purchased on our recent visit in February to the Finger Lakes for the Palate. This was not an oaky Chardonnay. The color was a pale yellow. On the nose it was clean and fresh. This Chardonnay, even though fermented and aged 10 months in new French oak, was less oaky with more acidic. It displayed overtones of lemon and pear. 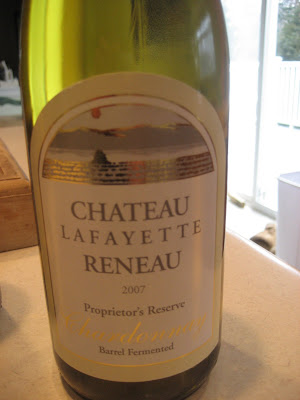 As we travel farther south, downstate to the Hudson Valley, I had a 2007 Whitecliff Reserve Chardonnay in the cellar. The grapes used in this wine come directly from their vineyard. This wine was light and didn’t have a strong malolactic feel. There was oak on the nose, with citrus on the back of the tongue. The wine was smooth and well balanced with a light creamy buttery finish. 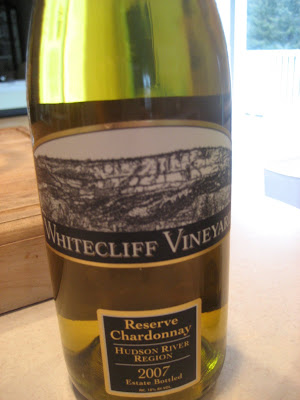 To compare the above selection a wine not made in New York State, I chose a Nederburg 2007 Chardonnay Winemakers Reserve from Western Cape – South Africa. Unfortunately I can’t say I’ve been to South Africa, but maybe in the future. This wine was acidity with hints of citrus and apricot. The apricot had a large presence. As the wine began to open the oak flavors were brought to life. As it opened, improved quite a bit all around.

We tasted all of the above wines out of the same Riedel glass (on different days) with cheese and crackers after work. It was a delightful way to end a long hard day. 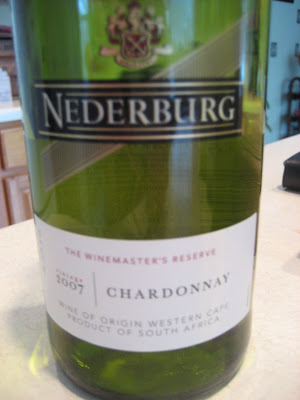 All the above wines were priced under $20.