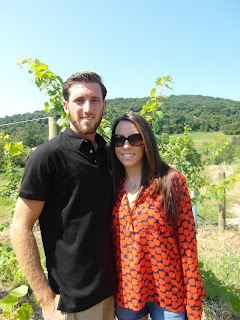 It is such a delight to see a younger generation getting into the local Hudson Valley wine industry.  That is what I found when I met with Nic Bozzo and Kayleigh Marquis of Nostrano Vineyards in Milton, NY. 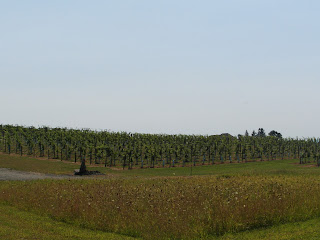 Nic went to school for Landscape Architecture at SUNY ESF which is on the campus of Syarcuse University.  He took a semester abroad to New Zealand and that is where the wine bug bit him.  He studied wine & design along with agriculture tourism in New Zealand before returning to graduate.  When that wine bug bites, it bites! 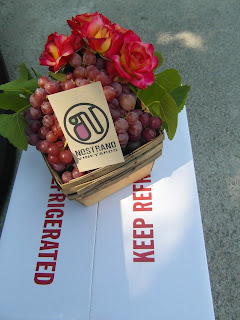 This year Nic re-purposed some of the land the family farm sits on. He tore up very old apple trees that were being abandoned and planted 1200 vines of Riesling, 1200 vines of Cabernet, 800 vines of Pinot Noir and 800 vines of table grapes. (I must say the table grape were wonderful, as Nic & Kayleigh sent me home with some and I hate half of them before getting home).  He planted all the vines by hand.  I can’t imagine his aching back afterwards.

There are 10 acres up on the hill that will be planted for what he calls his special project.  He’s keeping it a secret. 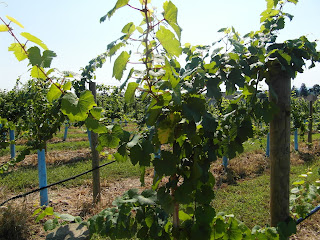 As we walked around the property he showed me the growth of his Riesling vines.  He calls them his “super vines.”  I asked him what type of miracle grow he used because I could have used it in my garden this year. It’s really all about the position, climate, terrior. 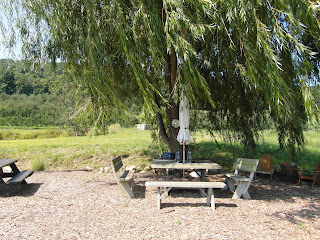 Nic wants quality over quantity and has plans for his boutique winery.  They want to make the vineyard a destination.  There is a beautiful picnic area.  They will also offer pick your own apples in the fall.  He does have plans for expansion as he has the back 40 to plant. All in time.

I wish Nic and Kayleigh the best of luck in their  venture together.  I look forward to watching and reporting on their progress.