What do Riesling and Petrol Have in Common 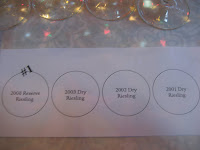 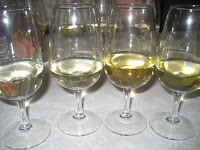 Wine ranged in age from 2001 to 2008.  As you can see from the above pictures, not only is the range in age but color of the Riesling.  You will notice that the clearer Rieslings are younger, while the older are more yellow in color.

What I noticed mostly in the older Rieslings is the taste of petrol, diesel, home heating oil.  It was present in some younger Rieslings but not as strong. No the wine was not turning.

Fellow blogger Tom Mansell, who is the Science Editor at The New York Cork Report did a wonderful story on the Petrol taste/smell in the Riesling, what it is, and why. I found Tom’s scientific reasoning very interesting.  Even I learned something.  Thanks Tom!

Please read Tom’s post on the New York Cork Report –  “Pumped Up With Petrol: TDN and Riesling” and gain insight to the smell and taste of Petrol in your Riesling