Every winter Paul and I try to attend at least one of the Culinary Institute of America’s Winter Dining Series.  They are themed dinners and many of them are wine themed. 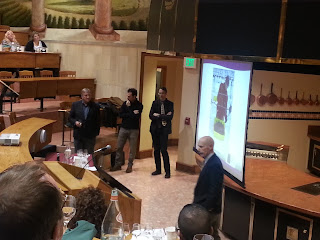 In looking at the brochure in December, we signed up for the Riesling 101 dinner and the featured speaker was Jim Trezise who is the head of the New York Wine & Grape Foundation as well as President of the International Riesling Foundation.  He also brought along Bob Madill, General Manager of Sheldrake Point Winery in the Finger Lakes. 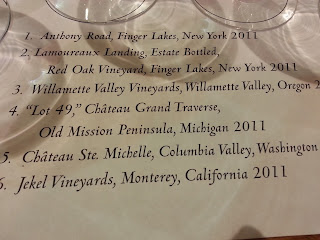 The evening began in the Danny Kaye Theatre with a nice lecturer on Riesling. We tasted Rieslings from New York, Oregon, Michigan, Washington and California. Some of the Rieslings I’ve tasted before, but new to me was the Lot 49, Chateau Grand Traverse from Michigan.  In fact, it’s the first wine I’ve tasted from Michigan.  What did I think? It wasn’t my favorite.  The 2011 Jekel Vineyards Riesling from Monterey CA, had the most going for it.  It was very complex with lots going on.  From an apricot, flinty, floral and stone fruit aromas to mandarin orange, peach palate with a nice rounded mouth feel.  The Riesling in this grouping that I liked the best was….drum roll…. 2011 Lamoureaux Landing Estate Bottled, Red Oak Vineyard, Finger Lakes Riesling.  It was just overall nice!  You got some apricot, floral and wet stone on the nose,  apricot and hint of tropical fruit on the palate with a nice subtle hint of petrol on the finish and aftertaste.  I am not one for the petrol flavor in my Riesling but the way it appeared on my palate and lingered was soft and nice. The wine was kind of saying, we had a great warm growing season and I retained some of the flavors even though Hurricane Irene showed up just at harvest. 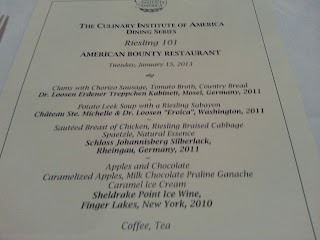 After the seminar we walked over to the American Bounty for a nice dinner. Dinner featured a nice variety of Rieslings from Germany, Washington and Sheldrake Point Ice Wine from the Finger Lakes. 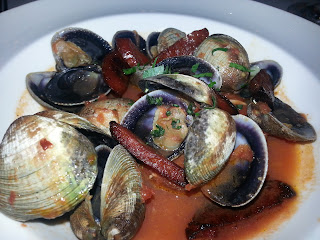 The Clams with Chorizo went great with the 2011 Dr Loosen Erdener Treppchen Kabinett.  The hint of sweetness in the wine complimented the spice from the Chorizo. 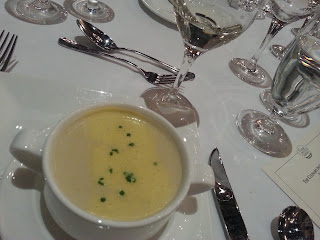 Potato Leek Soup with Riesling Sabayon was paired with a 2011 Chateau Ste. Michelle & Dr Loosen “Eroica” from Washington State.  This was also a nice pairing. Me and my small stomach was full after this  course, but not to worry, I made room for what’s to follow. 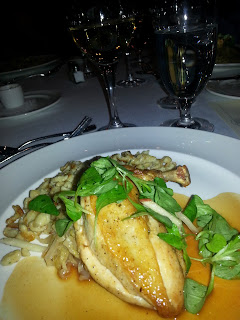 Main course was Chicken with Riesling Braised Cabbage and Spaetzle paired with Schloss Johannisberg Silberlack 2011 from Rheingau, Germany.  The pairing was done very well.  I didn’t quite care for the cabbage, but that was me. 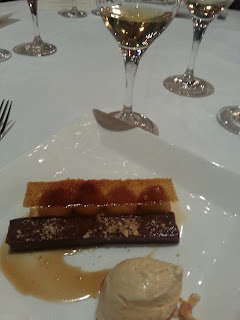 My grandma always said save room for dessert.  I always listened to my grandma.  Dessert was Caramelized Apples, Chocolate Praline Ganache and Carmel Ice Cream paired with 2010 Sheldrake Point Ice Wine.  I wasn’t a big fan of the apples. They paired okay with the ice wine but my favorite pairing of the three was the caramel ice cream and the wine.

If anyone is interested, the Winter Dining Series at the Culinary runs from January through March.