25 Years of Carmenere – The Carmenere Evolution of TerraNoble 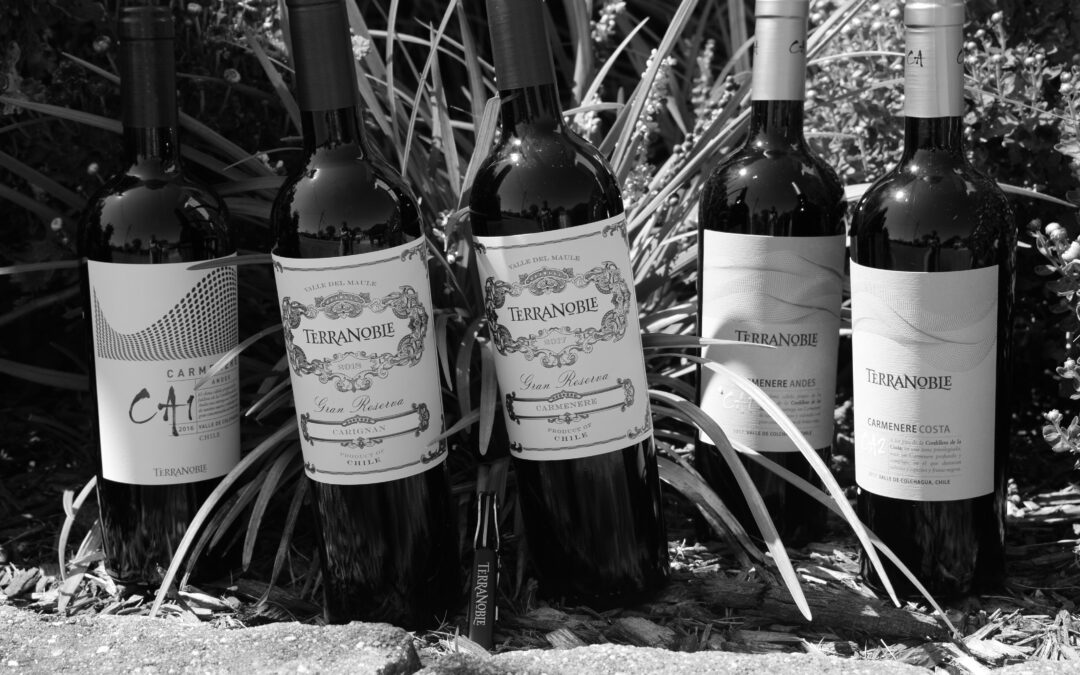 Have you ever purchased plants for your vegetable garden and what grew was not the vegetable that you purchased. That has happened to me a few times. Most notable, I thought I purchased cauliflower and brussels sprouts grew.

When Don Jorge Elgueta founded TerraNoble in 1993 something similar happened. In his vineyard in the Maule Valley he was growing Merlot, or so he thought. In 1994 his Chilean Merlot was identified as Carmenere. Instead of ripping out the vines, he realized that Carmenere grows well here and has dedicated his winemaking to showcase Carmenere and the different wines it produces when grown in different soils throughout Chile.

In 1998 TerraNoble released their first wine – Carmenere from their Maule Valley vineyard. In 2000 they expanded and planted more in Colchagua Valley (one vineyard is close to the ocean, the other the mountains – Andes). They also expanded and have vineyards in the Casablanca Valley.

I will say my first tastes of Carmenere many years ago was green pepper also known as pyrazines. I admit, it did turn me off, but I never gave up on the grape or the wine.

At TerraNoble they realized there was a problem with the pyrazines. The only way you can fix a problem is to experiment. To do this they decided to let the grapes hang on the vines a little longer so they would get a little over-ripe. Time frame we are talking is middle of May they would harvest. Then during winemaking to balance out the over-ripeness of the grape they aged it in toasted oak barrels. The result was a very bold full bodied wine with strong toasted notes.

Now after 25 years later, many trials, it has evolved to expressing the fresh side of the fruit, the terroir of the vineyard and acidity of the grape. Expression of place. As the years go by, the plant changes, ages and balances itself out. The 2020 harvest was done in March. Other things that have changed is how they treat the grapes in the winery. The extraction, the punch downs, the vinification process. Understanding the grapes and the soil it is grown in and the microclimates around it.

Winemaker Marcelo Garcia says what is important is being able to change. As one year you might harvest early and one year same vineyard a bit later. It’s understanding all these variables that are thrown at you and to be able to adjust according. Marcelo says “My wines are a result of fine-tuning heart and soul. I let the earth speak through the fruit.”

Today’s expression of Carmenere is very different from the past. So I encourage you to reach for a bottle and see for yourself.

“TerraNoble wines are crafted to express nature in flavor, texture and aroma. To reflect the distinct yet subtle touches of the Andes and Pacific.”

During the seminar with the winemaker, we had the opportunity to taste through a portfolio of TerraNoble’s Carmenere along with a Carignan. The label CA1 and CA2 denote the same grape – Carmenere but one is grown in the vineyard in Colchagua Valley closer to the ocean, the other closer to the Andes. It is really interesting to see the difference of the terroir and climate in the wine. Side note: the distance between the two CA vineyards is 60 kilometers

TerraNoble CA1 Andes Carmenere 2016 – 100% Carmenere from the Los Lingues Vineyard in Colchagua Valley. This vineyard is located at the foot of the Andes Mountains. The soils have high organic matter. It varies from loamy to clay, silt and loam texture and shows high content of organic matter. The climate is sub-humid Mediterranean which are warm during the afternoon and cools down rapidly due to the winds that blow off the mountains. The wine was aged in 85% new and twice used French oak barrels and 15% was aged in untoasted foundres for 14 months. Then aged 12 months in the bottle before being released. Aromas of red fruit and dry herbs lead to a palate that displays red fruit, dry herbs, a hint of pepper and mouth-drying tannins.

TerraNoble CA1 Andes Carmenere 2017 – 100% Carmenere from the Los Lingues Vineyard in Colchagua Valley. Same vineyards as the above 2016 and vinified and ages the same. However the only difference is the 2017 was aged for 14 months in 20% untoasted foundre and 80% new and 2nd use French 300 liter barrels. Then aged 12 months in the bottle before being released. Very interesting what a year makes and a slight change in vinification process. Different year, and a younger wine. The wine was fresh and fruity with red fruit. Nice soft tannins and complexity.

TerraNoble CA2 Costa Carmenere 2017 – 100% Carmenere from the Lolol Vineyard in Colchagua Valley. This vineyard is 40 kilometers from the ocean. The soil consists of granitic mixed with clay and loam, low fertility. Mediterranean climate with coastal influence. The wine aged in 85% new and twice used French oak barrels and 15% in untoasted foundres for 14 months and 12 months in the bottle before being released. This is an elegant and fruity Carmenere. Lots of black fruit, soft minerality, notable tannins and a hint of anise on finish.

TerraNoble Grand Reserva Carmenere 2017 – This is their flagship wine! 100% Carmenere from the Maule Valley. This vineyard, 25 years old, is close to the Andes Mountains near San Clemente. The soils are clayish of volcanic origin, colluvial and decomposed rocky substratum. The wine was aged 75% in previously used French oak barrels and 25% in untoasted foundres for 12 months then bottle-aged for at least 6 months before it was released. The wine is fresh with an elegance about it. Nice juicy black fruit, a bit of black pepper spice with medium acidity and sweet tannins.

TerraNoble Grand Reserva Carignan 2018 – This is 100% Carignan from Melozal vineyard in Maule Valley. The vineyard has poor and shallow granitic and quartz soils. The vines in this vineyard were planted in 1958. Wine was aged in 50% concrete eggs called Dolia and 50% in untoasted foundre for between 10 and 12 months depending on the lot. It then spent 6 months in the bottle before release. This was a beautiful and exciting wine. Fruity nose of strawberry, raspberry and sour cherries. The palate showed some mineral notes with nice red fruit, soft tannins and very well balanced.