If any of you follow me on Twitter I had a post Thursday about an 1890 bottle of port that tasted out of this world! I will reveal to you it was a bottle of Brotherhood Winery Port. The bottle seen here on the desk of the winemaker after the recorking. 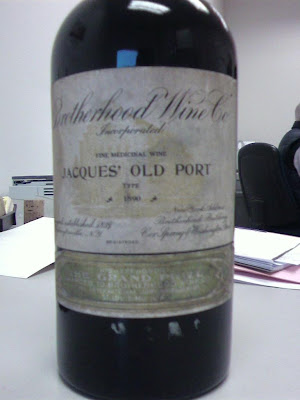 I am going to post Colleen Hughes’s words as she described the small taste she received from this Port.

“you won’t believe, bob called me down to the lab to “see” something.

some angel of a person brought in a bottle of 1890 Brotherhood port, we filled them up and re-corked them and bob took a little bit out so i could smell and taste. once he took the cover off of the glass, a ripe rush of raisin aromas flew up my nose. it was magical!!! unbelievable that something so old can still be in good and DRINKABLE condition! i took a micro sip and was blown away that there was still some valid qualities after over 119 years!!! I thought it would taste like vinegar, but it really was incredible!!! “

One clarification…where she stated they refilled it. They didn’t refill it with current port. What they do is take out the old cork that is small and shrunk, thus allowing oxygen in..and fill the bottle with beads or marbles to bring the wine level up. They then re-cork it and seal it. Good as new.

I wish I was there for this incredible moment. Maybe next time.