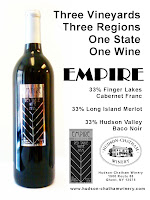 What comes to my mind when I hear the term Empire is first the state I live in, second is an Empire Apple. Now Empire has a entire new meaning – A Wine! Empire – 1 State, 3 Wine Regions, 3 carefully selected vineyards, 3 grapes produce one awesome one!

The Empire wine is the creation of Carlo and Dominique DeVito, owners of Hudson Chatham Winery. It is a unique reserve meritage blended from three of New Yorks’ most accomplished wine regions. Carlo & Dominique took the signature grapes from each of the three regions, Finger Lakes – Cabernet Franc, Hudson Valley – Baco Noir and Long Island – Merlot to blend this red wine.

Two-thirds of the wine was blended and aged in French oak while one-third was aged in American oak for about 16 months. The wine was then blended together in stainless steel, bottled and released six months later.

Carlo and Dominque are very proud of this blend and they should be. They wanted to showcase a New York 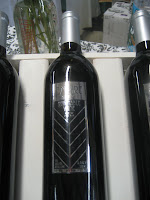 State wine in a way not showcased before that represents the three major growing regions in the state. To read more of the story about the creation of Hudson-Chatham Winery’s Empire click here.

I got to taste this wine this weekend. The first time I tasted Empire was Saturday, with Dominique and Linda Pierro from Hudson Valley Wine Magizine. The bottle had been recently opened. My initial taste was wow, the Baco Noir really comes through on this wine, with the strong spice of the Cabernet Franc to finish. I liked it, but felt the Baco really overpowered the wine. Leather and smoke with a hint of plum in the background and a long finish accompanied by the spice of the Cabernet Franc.

Sunday was a different day. Sunday I tasted the wine at the end of the day with Carlo. This bottle had been opened for a while so it had been “decanted” so to speak. It was a different wine. Soft, brought out the cherry flavor of the merlot, soft spice of the Cabernet Franc with hints of the cedar of the Baco Noir in the background. It was like I was drinking a different wine. Then again, that’s what aeration does. My thoughts are this wine is good now and it’s going to age very well.

Hudson-Chatham Winery only made 70 cases of this wine. If you are at the winery, or a farmers market and have the opportunity to taste Empire, and like it, purchase it. If you take the time to decide and come back later, you will be out of luck.