Franciacorta, The Hamptons of Italy

Let me paint the picture:

The Hamptons located on the Eastern end of Long Island, NY where the affluent New Yorkers and executives vacation and/or own large homes on the seashore. Also located in Long Island Wine Country and 2 hours from New York City.

Franciacorta, located in the Lombardy region of Italy. Rolling hills and mild climate tempered by Lake Iseo and the Alps. Located one hour from Milan,  where the wealthy people play and they make  sparkling wine in the traditional method..

Franciacorta a region of gentle hills in the district of Brescia. The wines they made in Franciaorta before WWII were uninteresting dry wines called Miolina. After WWII the major industrialists and cultural icons of Milan who had second homes in the area researched and decided that sparkling wine should be made in Franciorta. They weren’t going to settle for second best, they were going to make something world class. Hence they were the first appellation in Italy awarded DOCG status.

Franciorta defines an area, production method and wine.  It is more about the culture of the people making the wine. It is the official wine of Fashion Week in Milan.

Lago d’Iseo (Lake Iseo) is a deep in the alps. Glacier deposits called a moraine which is the rock and dirt scraped off the soil by a glacier and left, is what forms Lago d’Iseo. It’s these series of moraines, the first one dams up lake and the  second moraine formed a semi circle of stone scraped out of the alps in the hills above the lake. It’s in these hills on the edge of the lake, the 15 mile ring of stone where Franciorta is made.

Franciacorta is made in the traditional process and the grapes used in the production are Chardonnay, Pinot Nero and Pinot Bianco can be used up to 50%.  There are five styles of Franciacorta:

Non Vintage –  aged for at least 18 months
Saten – 100% Chardonnay, non vintage and aged at least 24 months and is produced as a Brut only
Rose – must be at least 25% Pinot Nero, non vintaged and aged at least 24 months.
Millesimato – vintage wine with at least 85% of the wine from the stated vintage.  Must be aged at least 30 months.  Produced in no dosage, Extra Brut, Brut and Extra Dry only
Riserva – A Millesimato, Saten or Rose which has been on the lees for a minimun of 60 months.  Produced in non dosage, Extra Brut and Brut. 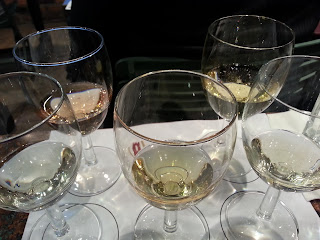 The wine!  We tasted 5 selections and all are available in the United States

Ronco Salino, Saten – This Saten spent 24 months on the lees.  It had small persistent bubbles and slightly on the sweet side.  Flavors of grapefruit, pear, apple and a hint of candied gingers.  This retails for $32

Majolini, Brut – Tighter bubbles and was lively and fresh.  Hints of baked apple.  I found this Franciacorta a bit more sophisticated yet fun. Retails for $29.95

Montenisa, Brut – This was a bit more breadier and yeasty but brighter and exciting. Retails for $31.95 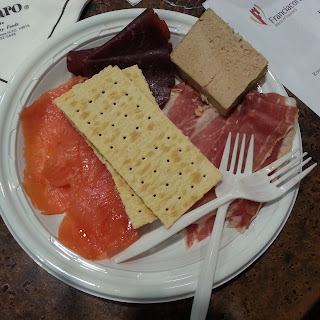 Montenisa, Rose Brut – This was my favorite.  Flavors of strawberry and ended with a hint of lemonade. Retails for $37.95

Ca’ Del Bosco, Annamaria Clementi 2004 – This wine was very sophisticated.  It was aged for 5 years before it was bottled.  It had some bitterness on the finish.  When eaten with a piece of aged beef, it softened the bitterness. Retails for $84.95