Imagine, a nice fall afternoon, sitting in the midst of a beautiful vineyard, sipping on some wonderful wine, while munching on delicious harvest inspired food prepared by Chef Angelo Sosa and Bull & Buddha Restaurant.
You don’t have to imagine, you can on Saturday October 15, 2011!  Beginning at 12noon with a wine reception and a wonderful harvest luncheon. (If the food and wine don’t inspire you to attend, an afternoon with that handsome Chef, Angelo Sosa should!) 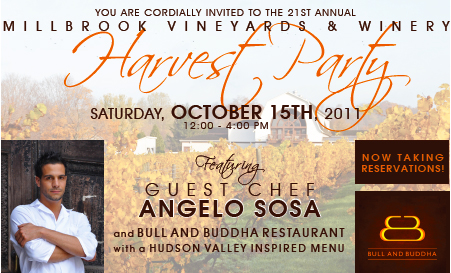 Your reception begins with Canapes, Local Cheese, Curried McIntosh Soup, Duck Pastrami with Cherry Confit and Asain Meatballs with Ginger and Apple Salad.  Now pair that with Millbrook’s 2005 Brut Proprietor’s Special Reserve, 2010 Tocai Friulano, 2009 Hunt Country Red and 2007 Proprietor’s Special Reserve Merlot.
Hoping you have more room there are three more courses plus dessert.  Next course and pairing is a Warm Fall Spiced Pumpkin Pie Soup with Butterscotch paired with Millbrook’s 2009 Proprietor’s Special Reserve Chardonnay.  Don’t drink all the Chard, because the Chardonnay along with their 2010 Pinot Noir are paired with the Slow Roasted Salmon with Charred Eggplant and Sweet & Sour Cherry.
If you thought the next course was dessert, you were wrong.  Now your glass is filled with the 2007 Proprietor’s Special Reserve Cabernet Franc and you are dining on Pork Belly with Old Fashioned Mustard and Cortland Apples and Ginger Chutney with Asain Succotash and Grilled Bok Choy.
Now we are onto dessert which is a Goat Cheese Cake with Pretzel Crust and coffee.
Tickets for the Harvest Party are $125 per person plus tax.  Guest are seated at tables of 8 or 10.  To attend please call 800-662-9463 ext. 17 for reservations. Harvest party is held rain or shine!
Angelo Sosa was the youngest of his siblings, born in Connecticut to a Dominican father and an Italian mother who believed meals were serious affairs. He graduated with High Honors from the Culinary Institute of America in 1997, after running the kitchen at the Escoffier Room, one of the institute’s highly acclaimed restaurants.
In late fall of 2005, Angelo turned his attention to consulting, having amassed the experience of opening many restaurants in his career. His consulting work includes: restaurant Stephen Starr’s Buddakan, Asian-Mediterranean hot-spot LOFT, Morimoto, Alain Ducasse’s Spoon Food & Wine in Paris among others.In the summer of 2009, Angelo launched his fast-casual restaurant, Xie Xie (shay-shay) in the Hell’s Kitchen neighborhood of New York City, which won him StarChef’s New York’s Rising Star award for “Best New Restaurant Concept.”

In 2010, Angelo was cast as a Season 7 “Cheftestant” on Bravo’s hit reality show, Top Chef. He was then invited to compete on “Top Chef All Stars” which is currently airing.Angelo’s most recent project is Social Eatz where he’s signed on Executive Chef and Owner, designing a menu that reinterprets NYC staples with flavors from across Asia.

Bull and Buddha restaurant fuses an urban interior with exotic design elements of the East nestled in Poughkeepsie’s revitalized downtown.  Served under the watchful eye of a hand-carved two-ton Buddha, the Asian-themed menu reflects the bounty and diversity of the Hudson Valley.