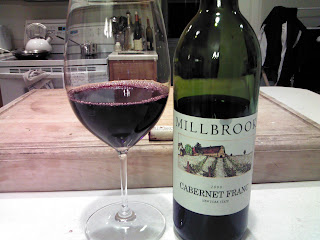 Cabernet Franc is one of my favorite wines.  Especially New York Cab Franc.  There is just something about it that turns me on more so than a Cab Franc from CA.

The first initial aroma I received from this wine was one of wet tobacco. Then as the wine was swirled aromas of black raspberry filled the glass with hints of cigar and spice.

The palate was filled with red berry fruit and juicy plum. There was hints of black pepper on the mid palate but that was just an preview for the finish which was bursting with spice and plum.

This will definitely go well with a grilled flank steak!