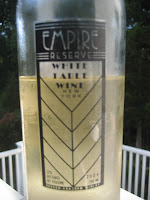 Hudson-Chatham Winery has released their 2009  “Empire Reserve White.”  Empire is a brand that Hudson-Chatham developed by blending wine wine from the three major wine regions in New York State: The Finger Lakes, The Hudson Valley and Long Island.  The release of the Empire White compliments the Empire Red that was released last fall.

The Empire White is a blend of Seyval Blanc from the Hudson Valley, Sauvignon Blanc from Long Island and Riesling from the Finger Lakes. Carlo DeVito of Hudson-Chatham Winery told me this is one of his biggest winemaking risks he had ever taken.  Instead of dimpled jackets and lots of filtering, they packed the barrels of blended wine in giant tubs of ice and tended to them daily.  Their goal was to let the wine form as naturally as possible.  The delicate flavors of the white wine mingled and the result is a grat wine that expresses the terroir of the three regions.

Onto the wine!  The color is a bit of the clear pale yellow of the Seyval and Sauvignon but the Riesling adds another shade of yellow.  On a color palette it would be a light warm golden yellow.

On the nose I immediately smelled yeast which lead way to the citrus of the Sauvignon Blanc and Seyval.  It is a very crisp and light wine with a soft mouth feel.  The taste is a little mineral with limon which leads to a honeydew melon which rounds out the taste and follows by a hint of green apple and grapefruit.  The wine finishes with a citrus ending.

This is a limited wine and is available in Hudson-Chatham’s tasting room or at the farmers markets they atttend.