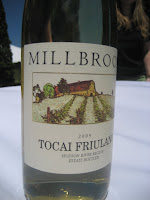 It was a busy weekend for the Hudson Valley Wine Goddess. I had purchased tickets to Millbrook’s Tocai Friulano New Release Party for my husband and myself and I got stood up. Paul decided on a concert with friends in Philly, so I called the Babysitter and Chrystal came with me. I must say it was a beautiful day! 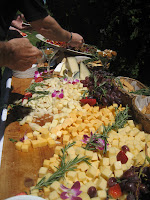 The event was very well organized and I wouldn’t expect differently from Millbrook.  Appetizers and wine were served from 12-12:30p.  There was an assortment of appetizers to nibble on.  Brescola wrapped Argula with Glazd Balsamic, Fried Gorgonzola Olives (very interesting), Assorted Cheese, Marinated Eggplant and Roasted Peppers. 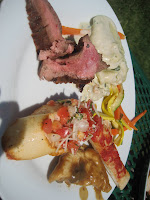 Lunch was served at 12:30.  We enjoyed dining on Chicken Marsala, Grilled Bistecca alla Pizziaola (Marinated Flank Steak with Olive Oil, Herbs and Tomatoes), Basil Cured Salmon, Spinach & Artichoke Ravioli, Roasted Summer Veggies and Assorted Breads with Villa Pillo Extra Virgin Olive Oil. They even had the steak cooked to various degrees so you if you liked it well done, you were able to get a piece well done.  There was consideration put into that by Amici’s because many times when you attend an event you get the meet cooked the way it’s cooked for all.

Somewhere along the line they put out the Cannolis but didn’t tell anyone. So when Stacy announced dessert was being served, I went to see what was offered.  When I got up to the dessert table there were 4 cannolis left.  But the most important is I got one! Amici’s Restaurant did a fantastic job with the food and catering the event.

The afternoon concluded with door prizes of wine (I didn’t win) and a vineyard walk with winemaker John Graziano.

Here is a video recap of the event.