To oak or NOT to oak Tocai 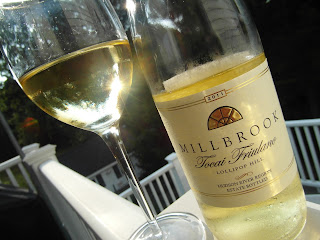 Millbrook Vineyards & Winery  produced two kinds of Tocai this year.  I reviewed the regular, steel fermented Tocai a few weeks ago.  I really like Tocai and it’s bright crispness and truthfully was afraid that the oak would take a way from the expression and characteristics of the grape. I was especially skeptical when David mentioned to me he was questioning the new vintage of the Lollipop Hill Tocai.

I first tasted the wine at their Tocai release party where I purchased a bottle to take home and give it a serious taste.

The Tocai was aged in somewhat neutral oak puncheons as seen above. Aromas of soft pear, limestone and hints of minerality and a little honeysuckle filled the glass.  The palate had a tinge of melted butter towards mid taste.  Lime zest was very strong on the palate and white grapefruit on the finish.

The oak puncheons did tone down the acidity of the wine.  Did it change the character and expression of the grape?  Yes, it mellowed it.  Think of their regular Tocai as fun and wild, and the Lollipop Tocai a serious relaxing wine.

Do i think they should oak the Tocai.  I think there is a place for it.  Quite honestly, it was hard to decide which one I liked best, because they each have their own distinct personalities.

The price…I went into the tasting room and grabbed 2 bottles of each of their Tocai’s without even looking at the prices. (I know, what was I thinking) The Lollipop Hill Tocai was $32 which I think is a bit on the expensive side.  Had I looked at the price, would have probably only purchased one.